I can't believe it's only been a year 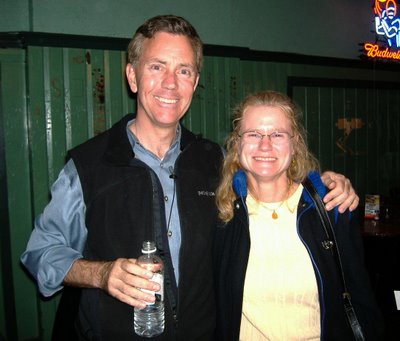 Yesterday was April 5th, the one year anniversary of Ned's Naples Pizza speech.

I was aware of Ned Lamont via Jane Hamsher's writing at Fire Dog Lake, and he sounded like a viable candidate. So Joyce and I decided to see what he had to say. It was the first time I'd heard Lamont speak, in the back room of a little pizza place. The event was sponsored by the New Haven DFA Link.

The room was jammed, and we got there early enough to get a table and have a pizza before the speech. That night I met CT Blogger, Spazeboy, Branford Boy, and a few others who I came to know well over the last year. Afterwards, Joyce commented that Ned seemed like he possessed many of the qualities that are lacking in our current leadership.

CT Blogger shot video that night, which is below. Within two weeks I started "Connecticut Bob" and began an amazing journey of political video blogging the likes of which I hadn't ever dreamed I'd become involved in. With CT Blogger's help, I learned how to shoot videos off-the-cuff and get them up on Youtube. By the end of the month I was posting my own videos on my blog.

It's been an interesting year.

We all won something in the past year and change.

Glad to have met you Bob, and the ultra-tolerant CTJoyce.

And yeah, CT Joyce is remarkably patient with my obsessive blogging.

Good LORD, it's been a year? That was quick.

I think your first words to Spazeboy was "hey kid, move out of the way...you're blocking my view."

Did I only call him "kid"? I must have been in a good mood...normally I would have simply set him on fire. LOL!

Hey Al, I think the 2nd video doesn't work. I tried clicking on it and it just says "loading" but doesn't start up. Are you getting the same problem with it? Maybe Youtube messed up that video.

Wow, YT screwed my video. I'll have to re-upload it.