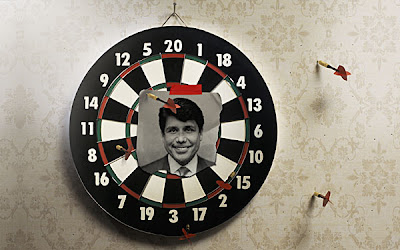 This little development has the stink of Harry Reid all over it. He's probably hoping to stall Burris long enough to remove Blago from office, and then maybe get a favorable ruling that turns over the appointment.

It's the kind of chickenshit maneuver that I've come to expect from Harry.

(Weirdly, my Firefox spellchecker DIDN'T have a problem with "chickenshit", but I can't type "Barack" or "Obama" without it freaking out!)

The vote was 114 to 1 for impeachment. The only surprising thing about it is that it took so long for the Illinois legislature to get their act together.

Of course, had they acted earlier, the selection of Roland Burris by Blago to succeed Barack Obama in the Senate would have more likely been blocked. As it stands now, once the Illinois Supreme Court rules that nothing about the Burris appointment was done illegally, Harry Reid and the Senate will have little choice but to seat Burris.

And about that one dissenting vote:

Rep. Milt Patterson(D-Chicago) was the lone vote against impeaching the governor. Patterson, from Chicago's Southwest Side, said after the roll call that he didn't feel it was his job to vote to impeach the governor. He declined comment on whether he approved of the job Blagojevich is doing.

Now, can we just get the Al Franken issue resolved and NY State seat filled so they can get to work? It's not like they don't have some important stuff that needs to be addressed.
Posted by CT Bob at 1/09/2009 12:39:00 PM

So was Clinton; what was the impact of that?

The important thing is that they waited so long to impeach Blago, they lost the chance to prevent him from appointing someone. If Blago was under impeachment when he appointed Burris, then Reid might have a legal leg to stand on. As it is, Burris will eventually get the seat, but only after Harry Reid effectively makes the Democrats look like a bunch of dupes.

And Blago will be removed from office as a result of his impeachment. No doubt about it.

"... after Harry Reid effectively makes the Democrats look like a bunch of dupes.."

Don't blame poor Harry for that.

(You didn't mean to hand me a staight line like that did you?)

But Harry is making us look even duper than usual!

(I guess that would be SUPER-duper!)

Barack and Obama freaks out your spellcheck. Is that why a certain party insists on calling him Houssien? J.C. Sr.

As a matter of strict fact, Blah-boy would have the same power to appoint once impeached as he had beforehand.

His impeachment has no effect on this constitutional duties or powers; Burris' appointment would have the same level of legality.

As ACR implied, there have been two impeached Presidents, but no convictions.

Bob, you're right. Until Blago is removed from office, they won't have much legal standing to prevent him from carrying out his duties.

Of course, if the appointment was made while Blago was under impeachment and later convicted, THEN the Senate might have some wiggle room to dispute Burris.

But as it stands, the only way they'll prevent Burris from being seated is if a) they discover some dirt on Burris, or b) Reid & Co. decide to ignore the law and do their own thing.

Good thing there's no precedent for that happening in government!