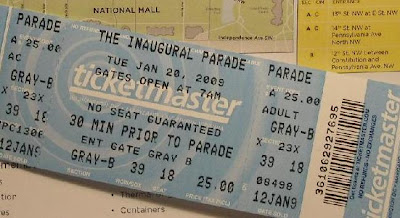 Here are some info and inauguration maps links I've found that might come in handy if you're heading down to DC for the inauguration.

Details are being released slowly; partly because of security concerns, and also because plans are coming together slowly. Bookmark this page and check back often as the big day approaches:

1/17 Update:
Google DC street closures is one of those inauguration maps that will be useful in discouraging you from driving in. I'm just sayin'.

Inauguration Map Links is another compilation of maps that you'll find helpful.

Events Calendar - find stuff to do during the inauguration week

Trafficland DC - Shows a map with clickable traffic cams, so you can see current conditions at many Mall area and parade route locations.

Inaugurationplan.blogspot.com/ has some great info.

Metro Inauguration Website - for all the important info on taking the Metro into town, including the three closed stations and special notices.

Secret Service Info - these are the people who keep our President safe, so you can assume they have good info available.

Vehicle Access map - good resource if you're dumb enough to try and drive in.

Click on any image to enlarge, or right-click and Save to save it to your computer. 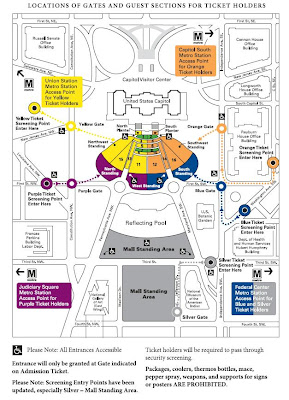 If you have official tickets to the ceremony, this map shows where you can enter the grounds. 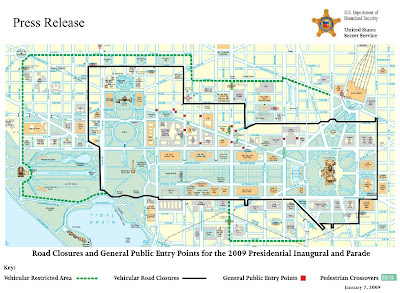 Here's the map of road closures and entries onto the parade route.

This map shows the locations of the bleachers along the parade route. The next map is even better. 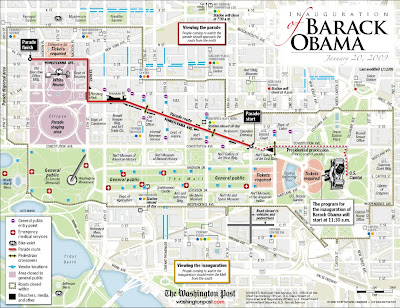 This map from the Washington Post rocks! It's probably the best map I've found so far. Print it out in landscape format (printable version HERE!) and bring it with you on Tuesday. You'll thank me for this.