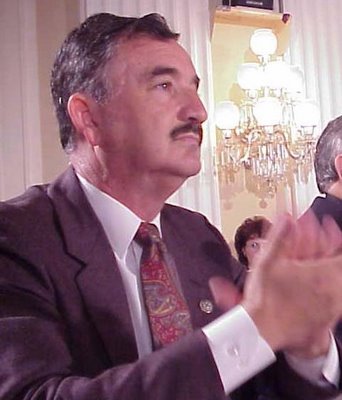 I say "new" because Ciro had previously served as a Congressman, winning a special election in 1997 to fill a vacated seat until his loss in the 2004 Democratic primary. He was defeated by Henry Cuellar, largely because of redistricting which enabled the former Texas Secretary of State to annex his base area and win.

Ciro reentered the race in early 2006, but was a distant challenger until a Washington Post photographer snapped a photo of Cuellar standing on the Republican side of the aisle, gleaming as President Bush affectionately grabs his face.

Ciro still lost the March primary by a narrow margin, but the TX Supreme Court ruled the state had violated the Voting Rights Act by taking large Republican areas and placing them in his district. An all-candidate primary was scheduled for November 7th.

Rodriguez and incumbant Republican Henry Bonilla got the most votes, and in today's run-off election, it looks like Ciro will take Bonilla's seat and go back to DC as part of the 2006 Democratic Wave.

The Weather Channel Announced the One Degree Hot List for Individuals and Organizations, Making the Greatest Impact on Global Climate Change.

I wonder if Lamont would have any impact at this point if we had won??

Had Lamont won, he wouldn't be in the Senate until January. Or didn't you know that?

Why is Joe on the list? Is it because his support of Cheney's Energy Bill is going to RAISE global warming by One Degree?

Wal-Mart is also on that list, showing that corporate interests rule. I mean, out of the top ten spots, they put a corporate megalith that gets half it's shitty products from coal-burning hugely-polluting China? I guess all the air-conditioning they use in Wal-Mart is terrific for it's environment. Bullshit.

These lists mean nothing when they're run by corporate entities.