As everyone knows by now, former President Gerald R. Ford passed away late yesterday at the age of 93. Ford was the first president who took the Oval Office without being elected; George W. Bush did the same thing in 2000 when the Supreme Court appointed him President.

For the next few days we'll be hearing what a wonderful guy and competent leader President Ford was. This is typical, and it reflects the MSM's reluctance to point out unpopular facts about a deceased president.

Well, I'm not buying into it. 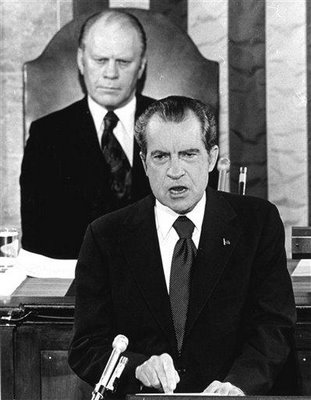 Gerald Ford was an ambitious quack whose lust for the White House overcame any reluctance he may have had over selling out his principles, and he did the nation grave damage by establishing the dangerous precedent of "pardoning" Richard Nixon of any and all crimes he "may have committed" associated with Watergate, or indeed, anything he may be guilty of whatsoever. Ford created the model for today's "culture of corruption" and the lack of accountability that exists in the Executive Branch today.

Many of the same "crimes" that Nixon committed back in the early '70's are being replicated by the Bush administration today. Because Nixon was never held accountable for his abuses of power, the current leaders don't feel they'll ever have to answer for their flaunting of the laws.

Yes, Nixon did resign the Presidency, but by doing so he sidestepped the utterly deserved indignity of being impeached and convicted, and being physically dragged out of the White House before a jeering crowd; then, when prosecutors continued their dogged snd rightful pursuit of justice for the ex-president, Ford's hand was forced and he issued his infamous pardon.

I've always felt that Nixon made a deal with Ford when offering him the Vice-Presidency saying that he'll eventually be President if he promises to give him a pardon if needed. I'm sure Ford was caught unawares at how quickly Nixon called in that favor, and he brought a lot of heat down on himself by issuing the pardon.

Once this precedent was set, Executive Privilage began to grow beyond the balance of power envisioned by our Founding Fathers. After Reagan's Iran-Contra mess, George H.W. Bush happily issued pardons to both convicted felons and players who were under indictment, thereby circumventing the justice process and preventing once again the guilty from being held responsible for their crimes.

So it's not a big stretch to see how the current Administration has made the lack of accountability it's trademark. Unless things change, Bush, Cheney, Rumsfeld, Rove, etc. won't ever be held accountable for their betrayals of the public trust.

That's what I think of Ford's legacy. I'll allow everyone else wax poetic about what a good President and all-around swell guy he was.

Rumsfeld was buddies with Gerald Ford, and when Ford ascended to greatness, he took Rumsfeld along as chief of staff. Rumsfeld took Cheney along, as deputy chief of staff.

"Unless things change, Bush, Cheney, Rumsfeld, Rove, etc. won't ever be held accountable for their betrayals of the public trust."

well, a good place to start is by demanding a new investigation of 9/11...

Bob, I agree with you, pardoning Nixon did nothing to help this country since we keep repeating the same mistakes over and over again. Don't worry about stealing elections, launching illegal wars, breaking whatever Constitutional law you want...just make a deal with the next President to pardon you -- what a great country we live in -- President's never have to go to jail, only the poor slobs that inform or protest against them!

Ford was a good president for 1 month.....................till he pardoned Nixon!
If Nixon would have been held accountable who knows what would have been different.
Maybe Reagan wold have not meddled illegally in central amrica, maybe George Bush senior would not have dealt arms for hostages, maybe this president Bush would have realized that he could not wage an illegal and immoral war!
Maybe none of these goons would have ever been president if the trial of Nixon revealed just how unconsitutional these idiots operate.
America, and the world would have been a better place!
This "healing" stuff, attributed to Fords actions, is a bunch of crap. You can not heal until you purge your body of the disease.

ifthethunderdontgetcha - Goddamn, did Dick Cheney ever take a picture where he didn't look like he had a stick up his ass?

anon2 - 9/11 was caused by terrists; what happened AFTER that, was pure Bush/Cheney.

Harriet - I think it would be a good thing to see a president or two spend some time in jail. I mean, we put Martha fucking Stewart in jail! Nobody can tell me that she was worse than GW and his cronies!

Iowa Boy - He wasn't even good for that single month; Ford wanted to escalate the air war in Vietnam to try to save Saigon. He was an asshole, through and through. I kind of wish he suffered more before croaking. You have to know what napalm does to human tissue.

So even though Ford never ran for the presidency in his 25 years in the House, he was:
"an ambitious quack whose lust for the White House overcame any reluctance he may have had over selling out his principles..."

Really? Any evidence of this overpowering lust for presidential power aside from your imagination?

And in your fevered conspiracy-theory driven view of the world, the thought that he might have pardoned Nixon because he (Ford) thought it was the right thing to do...well, that's just crazy talk, not even worthy of consideration!

"Yes, Nixon did resign the Presidency, but by doing so he sidestepped the utterly deserved indignity of being impeached and convicted, and being physically dragged out of the White House before a jeering crowd..."

Tried and convicted by CtBob...and your fanciful notion - apparently a common fantasy of Democrats, at least when it's a Republican in the WH - of him having to be "physically dragged out" of the White House kind of clashes with reality, doesn't it? If he was that entrenched that he would have to be physically evicted, then he certainly wouldn't resign, right?
No,wait - he DID resign!

Take a look at Ford's pardon of Nixon -
http://www.watergate.info/ford/pardon.shtml
When Ford writes - over and over - of how he has struggled and prayed and agonized over this decision and that...
"As President, my primary concern must always be the greatest good of all the people of the United States whose servant I am. As a man, my first consideration is to be true to my own convictions and my own conscience."...
that was all a load of crap - a tissue of lies - because he had made a deal with Nixon a year and a half earlier, right? All that hooey about his conscience is just so much BS meant to conceal his unbridled lust for power, huh?

This cartoonish way you perceive conservatives - that power is the ultimate goal and that any considerations of personal integrity or how history will judge are mere trifles to be discarded willy-nilly because it's all about the POWER, Baby! - is absurdly sophomoric.

"Really? Any evidence of this overpowering lust for presidential power aside from your imagination?"

Yeah...because he did it. Anyone who believes there wasn't a deal is dangerously naive, and probably lives in Fantasyland.

However, I'm sure it caught Ford by surprise how fast Nixon would need the pardon; and a quick threat to play the tape of their meeting was enough to get Ford to issue the pardon only a month later.

Do you think Ford would have voluntarily done that, knowing the howling shitstorm of criticism he would get only a MONTH into his fragile Presidency? Give me a break! His hand was obviously forced.

"and a quick threat to play the tape of their meeting was enough to get Ford to issue the pardon only a month later.

And again, your position is that when Ford wrote about agonizing over his decision, it was a bunch of BS because the REAL reason is that he was being blackmailed by RMN?
That RMN called him into the office and threatened Ford?
That his account of praying and struggling with the decision is a load of lies with no basis in fact because- a year-and-a-half prior to RMN's resignation- it had all been foreseen?

And you're HOW old?

"it caught Ford by surprise..."

Not much in the news back then that was NOT Watergate-related but it caught him by surprise that RMN might be the target of prosecution?

Your attempts to rationalize your hatred for this decidedly unambitious and all-round decent man - pathetically lame.

And as I keep saying, let's not forget East Timor. Hundreds of thousands slaughtered.

wow, you are an dick. a know it all idiot dick at that, you know absolutely nothing about Ford.

Yeah, Ford lied to Congress when he testified there was no deal. Sure!!!

Do any of you honestly think that Nixon would have appointed Ford to be the VP without being absolutely sure the guy would issue him a pardon when the time came?

Are you THAT simpleminded?

Go back to your playground, the grownups are talking here.

What I find more interesting is not what Ford did in 25 yrs ago but in the recent past. The tape interview with Woodward in 2004 condeming Bush in Iraq. Cheney, Rumsfield and Kissinger only to be revealed after his death. Almost sounds like Death throat revisited. You have to wonder

What "grownups" are those, B?
The ones who agree with your inspired-by-B-Movies scenario of RMN calling GRF into the Oval Office and telling him (in his best Cagney)that,"Dis is how it's gonna woik, Gerald...You're gonna pardon me, see? Or we'll have to play the tape for the papers. You don't want dat, do you Gerald? Just t'ink of Betty and da kids, if you know what I mean..."

Cartoonishly ridiculous but it fits your worldview of Republicans, doesn't it?

Heh-heh...good one! I'd vote for Cagney.

At least he was a real tough guy; unlike our phony cardboard cut-out Commander-In-Grief, and his faithful little lapdog Joey "Do-over".