Since it began yesterday, there's little else I've thought about.

Except the NY Giants. They managed to not lose, somehow. It's an early Xmas miracle.

This morning I woke up, and over a cup of coffee (and, in the interest of total disclosure, it was "Folgers") I checked Tom's blog. Yesterday they turned off the commenting feature in an hour and fifteen minutes, after allowing comments to go uncensored.

I give Tom credit; it took Joe Lieberman 5 days to figure out that being an immensely unpopular legislator doesn't translate well into the blogosphere. DeLay pulled the plug after roughly 99% of the comments in the first hour were negative/sarcastic/insulting. You can see the original comments before they were pulled at James Risser's TomDeLayDotCom blog.

But when I checked his blog this morning, I saw the "Post a comment" feature was back.

Holy shit, I thought, I gotta post something QUICK! So I wrote out a very neutral comment to test the feature. 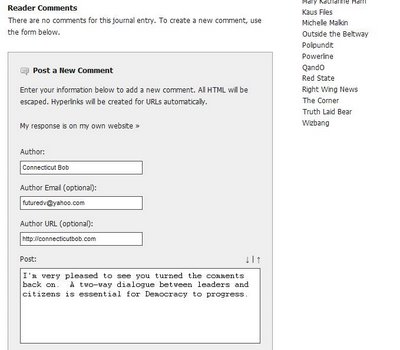 And guess what happened?

Hey, a semi-dwarf like 5'2" Tom DeLay (if his mugshot picture is accurate - see below) doesn't become the "Hammer" without possession of some smarts. So, in order to prevent the overwhelming tsunami of negative feedback to his smug and oh-so-smooth presentation, he did what everyone thought he would do.

He figured out that the way to appear to let a dialogue between the citizens and the indicted leaders exist was to moderate all comments, weed out the 99.98% of criticisms, and post the lobbyist-manufactured or right-wing pundit-generated comments to make it look like a real Conservative Love-fest.

As I type this, I'm waiting to see if my mostly harmless comment makes it out of moderation. 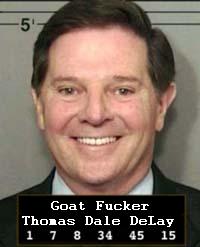 My guess is that if they check out the URL that I left (connecticutbob.com), they'll toss out my comment. But if they're screening out the obviously negative remarks, then my comment will seem like a breath of fresh air and they'll post it.

There is no chance your comment will make it. However, if you posted, "We love you Tom. THE HAMMER WOO" It would have made it.

Crap, and I was being nice, too.

As long as my messages are going to be thrown away, I might as well comment on what I really think of DeLay and fry the mind of whatever little robo-dolt he has screening the comments for him.

Hey, everyone's gotta have a hobby!