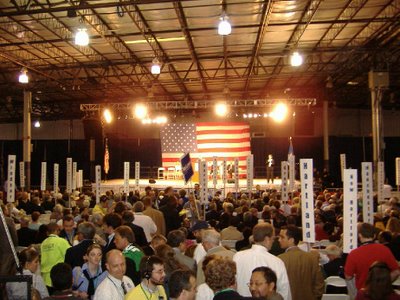 I just got off the phone with CT Blogger, whom I dialed by mistake, but ended up glad that I did because we had a great conversation. We chatted about all the great times we had this year, and CT Blogger said that the State Democratic Convention was probably his personal favorite event.

At first I thought that the Primary win was better, but then as we talked about all the amazing things that happened that entire weekend at the convention, I had to agree that while winning the primary was incredible, by that morning we were all fairly confident we'd win it.

At the Convention, on the other hand, Ned Lamont showed up as a distant underdog; where there was a LOT of doubt that he could pull the requisite 15% of the delegate's votes to qualify for the primary. That night, when Ned surged to over a THIRD of the vote, was amazing. And the next day, with the hotly contested race for the Governor's spot, with the recounts, John DeStefano showing up with a marching band, and Dan Malloy standing on chairs in the crowd, exhorting his supporters with a bullhorn, really was memorable. CT Blogger had procured us a pair of all-access media passes (the first of many we would get during the entire process), and we were right there, in the middle of all the action.

It was a phenomenal experience.

So yeah, I had to admit that the Convention was my favorite event of the year.

Here's a couple videos I made of the Convention:

Dan Malloy Wins shows the tense final moments of the recount, and the julbilant celebration by Malloy's supporters. It's less than 2 minutes long.

Connecticut Democratic Convention 2006 is my 24-minute opus highlighting the entire weekend. Roughly 12 minutes each covers the Senate and Gubenatoral challenges. I shot over 5 hours video, so there's plenty more that could have been included.

Nice trip back down memory lane (and thanks for helping me out when my key broke in my door :-)

This is the best video from the convention. Why'd you leave it out?

I'll let you in on a little secret.Lamonts staff had no f-ing idea how many votes they had and were hadn't even contacted most delegates even once.

Rick Malita counted Kiss Buttons on Delegates and when it was all over the "Kiss Button count" was almost a perfect match to the delgate count for Lamont.

I remember going around day after day getting Petition signatures for Ned to get on the ballot so when I got the call asking if I wanted to be one of Lamont’s delegates for Norwalk, I would have to say the 2006 State Convention was one of my favorite and proudest memories!!! The excitement that night was electrifying as John Hartwell came running around telling us “he’s in!!!!” with the vote count far from over! Each count after that the Lamont delegates would cheer as loud as could be and the Lieberman supporters got quieter and quieter! Then when Ned had won by 33% of the vote I got up dancing with the rest of the delegates in the isle and a woman came over and joined us – giving each of us high fives and that’s when I first met Annie Lamont!

Spazeboy, just when I'd almost managed to blot it out, you reminded me. Sheesh!

CT Keith, yeah I remember how popular those buttons were; and I'm sure in some years in the future they'll be worth a fortune. I'm saving mine!

Harriet, a very happy and fun New Year to you, too! Thanks!