Sen. Chris Dodd has publicly stated that our troop's involvement in Iraq is a "fool's errand".

In this op-ed for the Des Moines (Iowa) Register, Dodd has clearly spelled out his opposition to any further escalation of the war. This is the direct antithesis of Sen. Lieberman’s call for more troops in Iraq.

Why does this schism between our Senators exist? 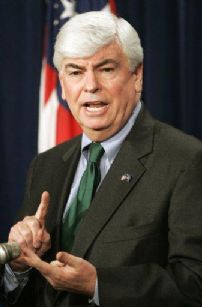 “The time has come for the United States to begin the process of getting our troops out of Iraq.

In Baghdad last week, I joined in a conversation with a West Point graduate who is serving in Iraq. He said, "Senator, it is nuts over here. Soldiers are being asked to do work we're not trained to do. I'm doing work that State Department people are far more prepared to do in fostering democracy, but they're not allowed to come off the bases because it's too dangerous here. It doesn't make any sense."

Dodd spent six days touring the Middle East last week, and he found absolutely NO reason for us to remain in Irag. He stated that the situation in Iraq is beyond hope, and it's time for our American troops to get out of the crossfire.

Our brave men and women have done everything asked of them with great courage and honor, but searching for military solutions in Iraq today is a fool's errand. True peace and security in Iraq will not come at the end of an American gun. It will only happen to the degree that Iraq's leaders are willing to take responsibility for governing their own country and securing their own future.

We are inexorably headed towards a tragic milestone - 3,000 American troops killed in this mess.

Sen. Kerry recently said this in the Washington Post:

Half of the service members listed on the Vietnam Veterans Memorial died after America's leaders knew that our strategy in that war was not working.

At what point will our leaders recognize the futility of their strategy? Will an additional 3,000 or more Americans need to die before they accept the inevitable?

And should many more Americans needlessly die, will there be a public accounting for it? Will we need to resort to a trial of our leaders for "crimes against the American people"?
Posted by CT Bob at 12/24/2006 01:52:00 PM

Dodd is one of those rare legislators who actually knows something about the world, particularly S. America. I won't be disappointed to see him run for president-not flashy but rock solid.