Sen. Chris Dodd is showing some backbone by visiting Syria in opposition to George Bush.

I think it's a good thing, for several reasons.

It's almost sort of a "If Bush is against it, it MUST be good!" thing. If the U.S. ran all it's foreign policy 180-degrees in opposition to George Bush's intent, we'd certainly be no worse off; and in fact probably significantly better off.

Next, Dodd is on a fact-finding mission that isn't filtered by Conservative politics. He'll get to see the situation up close, and be able to report on the actual situation there. Maybe Congress will get some facts instead of Bush/Cheney fictions.

Also, Dodd is sending a message to Syria and the rest of the Middle East that George Bush's "reign of terror" is coming to an end, and the U.S. will soon be controlled by leaders who believe in the option of constructive diplomacy. We'll actually make the effort to TALK to them before we drop the bombs.

I dunno...I kind of like the first reason best. It makes me happy to imagine Chimpy jumping up and down in frustration on the thick carpeting of the Oval Office, crazily ranting about how all those "meddlesome senators won't listen to me anymore!" 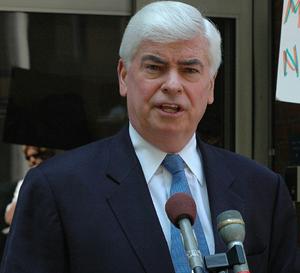 From ABC-News.com - By Z. BYRON WOLF and NITYA VENKATARAMAN

Dec. 13, 2006 — While President Bush continued consultations with military officials on the way forward in Iraq, Democrats, stirred by the delay in Bush's planned Iraq address and emboldened by the Iraq Study Group's recommendations, took Middle East diplomacy into their own hands.

One such Democrat, Armed Services Committee member Sen. Bill Nelson, D-Fla., ignored State Department objections and visited Syria this week to talk with leaders there about shared interests with the United States in Iraq.

Among the Iraq Study Group's 79 recommendations last week was a call for more direct diplomacy with Syria and Iran, something the Bush administration has declined to do.

In Damascus, Nelson told reporters in a conference call that his trip was a "fact finding mission," that he and Syrian President Bashar Assad "have a common interest in stabilizing Iraq," and called the meeting a "crack in the door."

Nelson has been to Syria two other times, but this was his first trip since 2004.