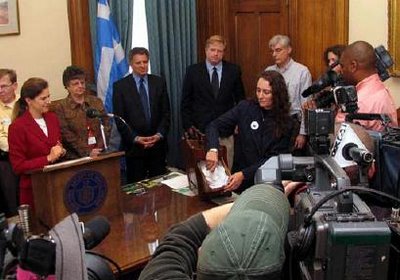 I received this press release from the Secretary of State's office today, which says that tomorrow the results of the audit on the new Diebold OS machines will be made public.

The event is open to the public, so if you're around Hartford just before lunch, drop in and then send me a report.

Secretary of the State Susan Bysiewicz will hold a news conference on Thursday, December 7, 2006 at 11:30 a.m. in her State Capitol Office (Room 104) to announce the results of a random series of audits performed in towns and polling precincts where optical scan machines were used this year in place of lever machines. A total of 17 different polling precincts in nine cities and towns were chosen for audits, and the results of those audits will be announced at the news conference.

All members of the media and the general public are welcome to attend.

I might cruise up there and videotape that presser...

There's a 10% chance I can go, but it's probably not gonna happen. Keep me posted.