Secretary of State Susan Bysiewicz held a press conference to discuss the results of the audit of the new Diebold optical scanner voting tabulators. The report and some comments are listed below. 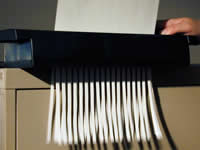 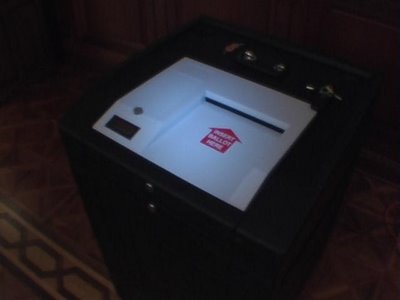 HARTFORD - Secretary of the State Susan Bysiewicz today released a report from her office and the University of Connecticut which shows that the optical scan voting machines used in several cities and towns on Election Day performed extremely well, and were proven to be a safe and secure form of voting technology.

The report was released following a randomly conducted series of audits in a number of cities and towns which used optical scan machines in place of lever machines this year. The audits were performed during the final week of November on optical scan machines used in seventeen polling precincts in nine cities and towns throughout the state. (A COPY OF THIS REPORT IS INCLUDED WITH THIS PRESS RELEASE)

The audits involved performing a manual recount of each voting machine used in these seventeen precincts to match the machine results with the separate hand-count. In the majority of the precincts, the counts matched up perfectly, and in those where the results did not match, there were only minor changes reported. In each instance, the change was due to a mismarked ballot, not to machine error, Secretary Bysiewicz said.

“I want to thank the University of Connecticut’s Department of Computer Sciences for helping us to design this audit and write this report. We have very good news to report today, because it is now clear that the optical scan machines performed very well on Election Day and without any problems. Any changes in vote totals found in these audits were due to ballots being marked incorrectly by the voter, not to any problems with the optical scan machines. We are very pleased with these findings and look forward to introducing optical scan technology to the entire state for the November 2007 elections,” Secretary Bysiewicz said.

“This success is the result of strong efforts made by our office and by Town Clerks and Registrars of Voters throughout the state to educate voters on how to use these new machines. We worked together to provide extensive training to poll workers and elections officials, ran Public Service Announcements on radio and television, and equipped each polling precinct with a brief DVD, narrated in English and Spanish, demonstrating to voters how the optical scan machines are used,” Secretary Bysiewicz said. “We also made sure that the ballots used closely resembled those found in lever machines. These efforts helped to make the new machines unintimidating to voters, and made them very comfortable to use. As a result, we saw few problems. We will continue these voter education efforts next year as well.”

Attached you will find two pages of comments from various elections officials throughout Connecticut concerning the performance of optical scan machines. In addition, the following comment was made by Douglas Chapin, Director of Electionline.org, concerning Connecticut’s introduction of optical scan voting technology this year.

“A big lesson from the 2006 election in that preparation pays. A key factor in whether or not jurisdictions had success or not so much success was the degree of preparation they applied to the process.

“The State of Connecticut moved to optical scan voting technology from their old lever machines for the first time in twenty-five of their 169 towns on Election Day. Connecticut, as a result, was one of the ten states we identified as states to watch on Election Day in our Election Preview in October.

“And yet, that experience in Connecticut went off largely without a hitch in Connecticut, even though they had very competitive and close elections in several races. Connecticut fanatically – I might even say obsessively – prepared for this election. They designed their optical scan ballot to look like a lever ballot, so voters would be comfortable with it. They had portable DVDs playing instructions in English and Spanish in the polling places. They had large numbers of new, well-trained, and in many cases younger poll workers available to help their voters. As a result, at the end of the day, that change was not as scary to voters, and it went off without a hitch.”

December 1, 2006
Use of Optical Scan Machines in Connecticut: A Success!

Source: An Analysis of 2006 Election by Electionline.org
(Excerpts from December 2006 report)

Electionline.org is the nation’s leading nonpartisan, non-advocacy organization researching, analyzing and reporting on election administration and reform. It is funded by The Pew Charitable Trusts with a grant administered by the University of Richmond.

• “Connecticut saw a smooth transition to optical-scan voting in a number of localities using the system for the first time. “

• “New technology performed mostly without incident, as it did in the 25 jurisdictions in Connecticut using optical-scan machines as a replacement for lever systems.”

• “At this early juncture, the difference appears to be preparation. Connecticut succeeded on Election Day 2006 because it thoroughly (one might even say obsessively) prepared for the change. “

• “Voters in 25 towns used recently implemented optical-scan equipment at the polls, but it was the antiquated lever machines that disenfranchised a few dozen voters in West Hartford after a voter noticed the machine displayed the wrong candidates for state representative.”

• “Voters and poll workers alike had generally high praise for the optical-scan system, which used paper ballots formatted to bear a strong resemblance to a lever-machine layout.”

• “Other tools that aided the switch included training DVDs in Spanish and English at every polling place, instructors at the entrance to polling places eager to help voters grasp the new system and poll workers galore, including more young people than typically observed working at polling places in other parts of the country.”
Source: The New Haven Register (11/10/06)

• “The average voter, and especially the seniors, seemed to really like the system, and many said they liked it better than the old system” (Joe Buonome, East Haven Registrar of Voters)

• “We were quite pleased with the way things went”, calling the process “quite smooth” (Joan Angelini, Westbrook Town Clerk)
Source: The Connecticut Post (11/06)

• “Most voters appeared to be impressed with the speed and directness of the new system”.

• “It was much easier, very clear, easier to read then going across and pressing all the levers. It was just clear.” (Karen Nocera, Middletown Voter)
Source: Associated Press (11/19/06)

There's nothing secure about them. All she was able to show is the appearance of a safe, secure ballot. There was/is no audit of the actual software, and no proof that there is no malicious code laying in wait for a different election. That means that the engineers or Registrars, if they followed the current state laws regulating voting machine preparation, likely committed perjury by signing affidavits that the machines were tested and operate correctly.

I listened to Dori Smith's audio report from NPR posted on My Left Nutmeg. I think it provides a helpful counterpoint to the happy campers who know not of what they speak.

I guess Susan has never seen Black Box Voting's 'Hacking Democracy'. Her report wouldn't be quite so upbeat.

I'm just reporting what Susan said; I haven't commented upon the results yet.

Personally, the only 100% verifiable method of ensuring accurate results would be to do a manual recount of each and every vote.

Barring that, I think the best way to ensure fair elections is to have a system in place that resists hacking. Yes, the machines themselves are hackable; I'm talking about the people and protocols that are in place.

The machines won't hack an election by themselves, you need PEOPLE to do that. Plus, if an election is very close or suspect in any way, PEOPLE will do a manual recount, with the paper trail (ballots) that we previously DIDN'T have with the old lever machines.

It boils down to this: we have to have new machines, by law. The paper ballot scanners have a verifiable paper trail. The procedures require TWO people (one from each party) to have custody of the machines from pickup at State until after the results are tabulated. And a close or contested election can be recounted from the original ballots. The state can and should copy the contents of each memory card and examine it later if needed to see if there are any patches or cheats installed on it. The ballots have to be preserved for at least two years, so any challenges that end up in court may still be decided by ANOTHER recount. We need to stay INVOLVED in the entire process, and make sure election officials have solid protocols in place and are properly trained.

Yes, it's NOT perfect, but we have to understand that there WILL be new machines, and the best way to ensure fairness is to be involved in the PROCESS, not just complain about the hackability of the machines. Ultimately, it's PEOPLE who are responsible for the qualilty of the elections.