There was one thing that really annoyed Hunter S. Thompson

It was the time when he was left off a list. 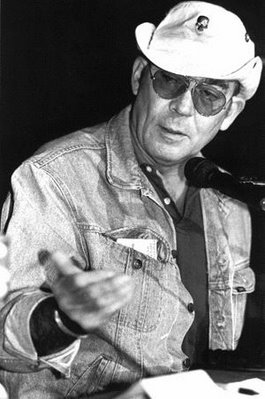 Dr. Thompson was upset because the list from which he was omitted was Richard Nixon's infamous "Enemies List".

When Nixon was at his most feared and loathed, he put together a list of everyone he thought had "screwed" him during his political career. The list contained names of politicians, journalists, and "subversives" of various types. It was revealed to the public during the miasma that was the Watergate scandal. 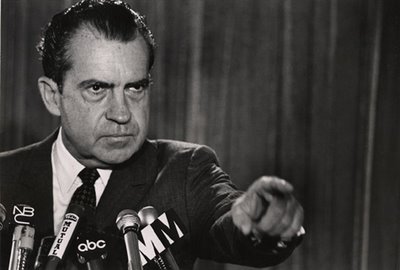 When Thompson found out he'd been left off the list (likely due to an oversight), he was apoplectic. "What the fuck do I have to DO to get on the list?" he screamed in frustration, "...nobody has bashed Nixon worse that I have, repeatedly, in print, for years!" To the good doctor, being left off that list was a badge of shame, a stain on his reputation, and an embarrassment to all his friends and colleagues.

I sort of know how he felt.

It wasn't from lack of trying that I'd never made any lists. When I started political blogging early this year, I immediately jumped into the fray, with a detailed and (in my opinion) brilliant assault on Joe Lieberman for his stance on Plan B emergency contraception availability.

Never heard a peep from him about any list. Maybe I was on his list, but it doesn't count if it doesn't get leaked to the press. 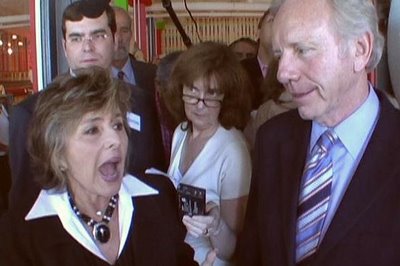 I started videotaping the senator while asking the questions he hates. Several senators, in fact. But as far as I know, none of them have a list of "enemies" that I could lay claim to.

Oh, well. I guess the days of "enemy lists" have passed us by.

And then I found out from Colin McEnroe's blog that something called the Family Institute of Connecticut has a list of "opponents" on it's website.

Apparently, these are websites that they feel exhibit "left-leaning" views. Whatever those are. But when I checked out the FIC blog, I saw that Connecticut Local Politics was one of the few websites listed!

That really pissed me off! How unfair! Hey, my blog is WAAAAYYYYY more "left-leaning" than frickin' CTLP! What are we, chopped liver? Those guys over at CTLP have actual Republicans posting articles! Yeah, it's true.

And I've never seen any videos of them chasing down "family-friendly" Senator Joe and asking him if he thinks it's a good idea to deny EC from women at Catholic Hospitals! I mean, give me a break!

So I wrote to FIC and asked (politely) if my pro-Choice, pro-Women's Rights, pro-Gay Marriage blog qualified for inclusion on their list. I felt it was...necessary...for me to correct this error of omission.

We had a nice, civil exchange; and the upshot is that "Connecticut Bob" is now included on their "Opponents" list. I've created a much more respectful "Distinguished Adversaries" list, which will include any opposing blog that links to us.

And I fully intend to justify my placement on the list.

Congrats on making the "list", CT Bob. Obviously, they weren't paying attention to the Dem primary and your great work; otherwise, you wouldn't have had to beg to get on the Opponents list.

I prefer a "Godless Heathens" or "Hellbound Fiends" list to "Opponents" any day.

If there are born-again Christians in Connecticut who have blogs but who haven't decapitated anyone do they get to be on the list? What makes one a distinguished adversary? I try to be as non-political as I can and I do not have a "Godless Heathens" list. At least not yet. Although I think both "godless heathen" and "hellbound fiend" are redundancies.

Please let me know where I might fit in.

All kidding aside, Brian Brown and Co. are good people and you should at least admire their courage as they are doing their work in one of the bluest of the blue.

Nick clearly you have to link! You can't get something for nothing!

I'm sorry Nick but anyone who would deny my stepbrother the right to marry and me the right to contraception doesn't fall into my definition of "good people". There isn't much to admire in that.

I can and do get along with people who hold different political and personal views than I do. My issue is when those politics cross over into oppression. I don't want to force anyone at the FIC to believe anything, but I also don't want to deny anyone their rights. That's the biggest difference. It's one thing to personally oppose abortion, gay marriage, and any other number of issues. It's quite another to actively oppress those who disagree.

Good work, Bob. As the Bible says, ask, and ye shall be enemy-listed.

I think you must be on the LieberList ("you're not gonna give up, are you?"), and the Little Jimmy "I'll Crush 'Im" List as well. Connecticut Bob is much too active to have an unlisted blog.

I was playfully tweaked on my own blog for linking to Connecticut Local Politics, but that isn't enough cred for you guys maybe. ;)

As far as politics becoming "oppression," that's cute. I guess that kind of vocabulary is supposed to cow me into submission - can't compete with that kind of Marxist rhetoric!

The Left doesn't give a fig that its decades-long campaign of undoing 3500 years of Judeo-Christian (without resort to legislative process in most cases) is considered oppressive by many.

Oh, I get it! It's OK to personally oppose abortion as long as one does not dare to say so or attempt to influence public policy in any way. This reminds me of the people who were personally opposed to slavery and would never actually own a slave, but were OK with Dred Scott.

How on earth is Brian Brown suppressing anyone? By telling cgg's stepbrother that the right of two men to marry was just made up a couple of years ago, which of course we all know it was?

Nick, thanks for commenting, and you're welcome to post here.

As far as I'm concerned, anyone who has an opinion and expresses it in a reasonable manner is welcome.

But you should be aware that there ARE people here who have suffered because of the intolerance of some Christians and their policies; you shouldn't be surprised if they express opposing opinions.

The issue of faith in politics is a tricky one. There are too many issues to discuss here, and attitudes like "marriage has been around for over 3,000 years, while gay marriage is relatively new, so that means traditional marriage is obviously better" isn't going to carry much weight.

If the Christian right are REALLY interested in protecting marriage, they should try to legislate divorce out of existance. Because THAT'S what destroys families, not two guys in dresses (or better yet, two really hot girls) getting married.

But that's a political football that even the most aggressive of the Right won't dare carry.

Happy to have you on our blog, Bob; you're one of the more entertaining characters in leftwing CT blogdom.

Even if not persuaded by Nick's point against same-sex marriage you have to concede that he's right about the novelty of it. We're not the ones pushing some radical new innovation here. You are.

Peter, thanks; yeah, I try to have fun with this stuff when I can.

While I agree that the concept of gay marriage in the U.S. is fairly new as a cultural and legal issue, that doesn't diminish the rights of people who wish to partake of it. Remember, homosexuality was a crime until recent decades; I can't imagine you'd advocate a return to those days, would you?

Thanks, Bob. Actually, I agree with you that divorce is terrible and I think no-fault is one of the biggest mistakes ever perpetrated on the American family. I would absolutely support a move to roll that back and make it harder to obtain. The problem is that once something like that is inculcated into society it becomes difficult to change.

BTW, why would I be surprised that people would express an opposing viewpoint to mine? What I do strongly object to however, is the casting of everything in the language of victimization and "rights." If new rights can be invented out of whole cloth, how much of a right are they really?

What about the "right" of traditional parents to not have their children exposed to the novel and unhealthful idea that sodomy is good?

IMO the deconstruction of language in recent times and the Orwellian creation of new words (e.g., homophobia) is an ideological tool meant to suppress all debate and protestation at the dismantling of society.

Rights, under the American system of government, come from the Creator and are common to all. We used to hold such truths to be self-evident.