...and for irony, judging from the shirt he chose to wear instead. From News.com.au:

AN Australian was barred from a London-Melbourne flight unless he removed a T-shirt depicting George Bush as the world's number one terrorist. Allen Jasson was also prevented from catching a connecting flight within Australia later the same day unless he removed the offending T-shirt. 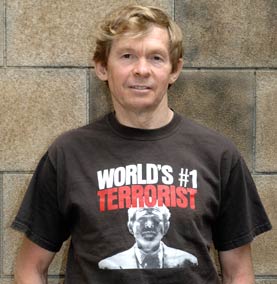 Mr Jasson says Qantas and Virgin Blue were engaging in censorship but the airlines say the T-shirt was a security issue and could affect the sensitivities of other passengers.

"The woman at the security check-in (at Heathrow) just said to me, 'You are not wearing that'," Mr Jasson, 55, said yesterday.

After a prolonged argument about freedom of speech and expression, Mr Jasson said a Qantas gate manager said he could not fly at all unless he wore another T-shirt.

Mr Jasson said his clothing had already been checked in and he was forced to buy a new T-shirt – this time with London Underground written on it – coincidentally the site of a terrorist attack last year.

Mr Jasson said the T-shirt often sparked comment from people in the street.

A Virgin Blue spokeswoman said the airline had a policy to ban offensive clothing and bare feet. "Most people use common sense and don't go out of their way to offend people," she said.
Posted by CT Bob at 12/14/2006 10:59:00 PM

"...A Virgin Blue spokeswoman said the airline had a policy to ban offensive clothing and bare feet. "Most people use common sense and don't go out of their way to offend people," she said."

Well, I kinda agree with that. What if, say, David Duke wanted to walk through the Atlanta airport with a t-shirt depicting African-American being lynched along with some nasty comment underneath. I would fear a riot or at least an assault on Duke which would shut down the airport.

Even though I agree with the sentiments expressed in the Bush shirt, I can see the point of the airline.

Frankly, the guy could have just turned the shirt inside-out and continued on.

Well, it's a matter of what is or isn't acceptable. Your extreme example is obvious; it's the old "you can't yell fire in a crowded movie theater" argument. (I always wondered what's acceptable to yell if the theater actually IS on fire? I wouldn't want to get in trouble; I guess I'd just play it safe and let the place burn. LOL)

Sure, the shirt is controversial. It's the argument about where do you draw the line? These kinds of stories are important to discuss, because without occasionally testing the waters of free speech, eventually they may stop allowing people to swim in them.

But then again, this was an England/Australia problem. I'm not entirely sure if their freedoms are spelled out as precisely as ours.

"Most people use common sense and don't go out of their way to offend people," -- but its okay to offend people by sending them off to war based on lies? I'm not addressing this to you, Stoic, because I know you agree with the statement on the T-shirt -- I'm just trying to point out that offending our President is definitely in order when he has no problems acting above the law and offending us by taking away our Constitutional rights!

W just not suppossse to talk about certain things in public because they can upset someone.
Is better sanitize everything and leave important decisions to wise...politicians.
Not talking about war because is upsetting but sending soldiers to kill children with cluster bombs is OK...but only if we don't talk about this...
The "real crime" is to show "upseting" pictures not to do upsetting things.
HEY guys lets pretend!