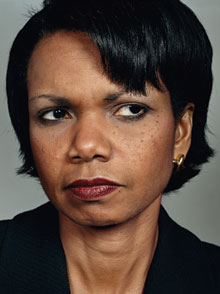 OK, that's an awful headline...it's the sort of pun that the New York Post relishes (relish on rice? yecccch!). I apologize for that, and I promise to keep the puns to a minimum here.

UPDATE - Just to amplify my point about the terribly punny headlines, here's an image that Caffeinated Geek Girl sent in from the Post a while back: 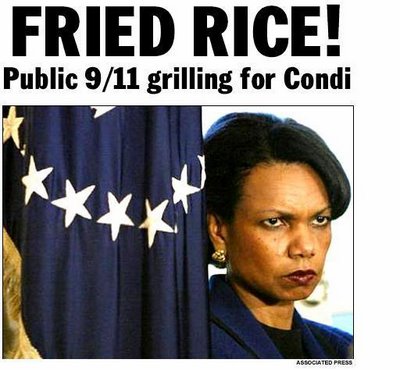 Ye gods! What IS it about being a treacherous, murdering harpy that makes a woman scowl like that all the time? Just wondering.

But it's an opportunity for me to talk about the lack of accountability that is a hallmark of the present administration. George Bush and his band of merry thugs seem to only acknowledge any mistakes they've made AFTER they're out of a job.

Rumbo was a prime example. Who do you think released that memo of his? Of course is was "The Donald" himself. In the days leading up to the election, he saw the writing on the bullet-pocked wall, and realized that only with a desperate paper trail would he have any hope of redemption after the ax fell. So he dashed off a quick memo essentially saying "We screwed the pooch", and then after he was fired he himself leaked it to the media so he can claim he tried to warn the Chimp-in-Chief, but it was to no avail.

Anyway, Condoleezza Rice has been talking about the war in Iraq, and while it appears she may be admitting that some mistakeswere made, she's taking no real responsibility for it. No accountability at all. From ABC news:

Although she is not yet ready to explain herself, Secretary of State Condoleezza Rice is admitting that the United States has made mistakes in Iraq.

"As to whether the United States has made mistakes: Of course, I'm sure we have," Rice told the Arabic satellite television station Al-Arabiya. "You can't be involved in something as big as the liberation of a country like Iraq and all that has happened since, and I'm sure there are things that we could have done differently."

However, Rice told Al-Arabiya that now is not the time to talk about U.S. mistakes in Iraq.

"Frankly, we are looking ahead," she said.

Ah, so she does admit mistakes were made.

Something tells me the only mistakes she's willing to concede would be on the order of neglecting to include ruffled potato chips in the mess halls, and instead only providing the flat kind. Big mistakes like that.

I don't see her saying it was a huge mistake to invade Iraq or anything, and that's the real issue we're concerned with.

Once her tenure as secretary of state is over and she is back at Stanford University, she said she will reflect on the war.

"I can look back and write books about what we might have done differently," she said.

Isn't that nice? Condi will scurry away from the wreckage of US foreign policy that she had a large hand in messing up, but at least she'll make some money writing about it.

You know what? I'd rather burn the thirty dollars she's going to ask for her shitty book of falsehoods. At least then it might help warm my house for a little while when fuel prices skyrocket out of control because of our nation's part in destablizing the entire Middle East.
Posted by CT Bob at 12/04/2006 04:38:00 PM

Absolutely right on target with this!! Great analysis and well-deserved suspicion that Rummy was tidying up before he resigned...as to Condi-ment, well, she is a heartless true-blue piece of work.

Man, you are good at word play!

Word is that she's going to be Time's Person of the Year. Why? I haven't a friggin' clue - other than a black female Repubilcan president would sell copy faster than OJ and the Ramsey's at a knife & child beauty show.

Great work, man. Of course, I'm biased - "Connecticut Bob" / "Jersey McJones" - a match made in heaven (or at least in the living hell of the NY metro area...)!

JMJ, everything I know, I learned from the NY Post! LOL!

I think Time Magazine is rethinking their award to Condi; for this year only, it's being renamed "Douchebag Of The Year".

Glad you liked the old Post Cover. I saved it a few years back figuring that it would come in handy someday.

Ned Lamont should be Times "Man of the Year".

He lost his election but changed the entire national landscape.

Condi should do what she does best.Go Shopping for shoes.

When history is written Condi and Amelda Marcos will be seen as eqivelents.

Congrats on getting named to the FIC Enemies list. Of course, a real blog doesn't have to beg...

I recently received an email subject, "The Solution" for Iraq! The gest of the email was to help Bush, Cheney and Rumsfeld find something to do once they're out of office. No reason not to add Condi as well!!!

The Solution is: "to start a campaign to send the Bush-Cheney-Rumsfeld team to Iraq in 2008. They deserve the opportunity to "finish the job" in Iraq, and I think that the sight of the three of them tooling around the streets of Baghdad in a lightly armored Humvee would do a lot to improve the morale of all Americans."

Maybe we can even send Lieberman to help these guys out since he's been their trusted friend and certainly would be a great advisor to them!

I think we need to send this solution to the "Baker Committee on Iraq" imediately!!!

Gabe - LOL! Yeah, it was kind of pathetic the way I groveled to make their "enemies" list...I'm so ashamed.

Blame Colin...he gave me the idea! At least I have some fodder for a new blog post; since the election, it's been harder to find things I want to write about.

Welcome to the opposition Bob!

And I got a whole new article out of it. Talk about making something out of nothing!