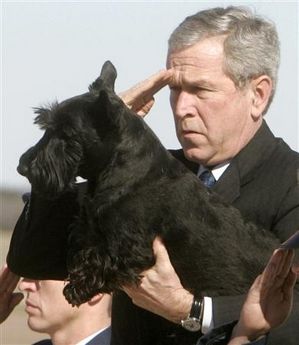 (The Commander-in-Chief, along with George W. Bush. Photo by Larry Downing/Reuters.)

This morning I read what might be my favorite examination of President Bush's pathology that I've ever seen. The article is titled “It’s Important to Understand . . . “, and Scarecrow really captured the essence of W's character (or lack thereof).

If there's one phrase I will always associate with George Bush, one we've heard a gazillion times, and one that epitomizes the intellectual chasm this President has built between himself and the country, that phrase is the one that begins with "It's important for [everyone else] to understand . . ." How many times has this President lectured us with those words to remind us of our ignorance and our inability to grasp what's important?

The article ends with Scarecrow's pointed "letter from the American People".

I'd like to acknowledge that Scarecrow's work over at Fire Dog Lake has been a real pleasure to read, and I look forward to seeing more of his writing. Do yourself a favor and read the entire article, because...