Seatac International Airport, in Seattle, had some artificial Christmas trees put up, at airport expense, in their terminal and along the access roads.

A local rabbi asked that a menorah also be placed in the terminal.

The airport management decided to remove the trees rather than agree with the rabbi.

The rabbi then received "all kinds of calls and emails," many of them "odious," said a spokesman.

So he dropped his request, and the airport put the trees back up.

Ah, the joyous spirit of Christmas; doesn't it warm the very cockles (*) of your heart? 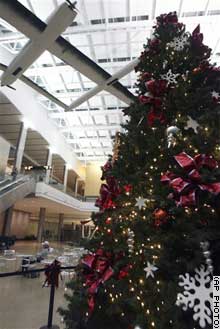 SEATAC, Washington (AP) -- Christmas trees are going back up at Seattle-Tacoma International Airport.

Pat Davis, president of the Port of Seattle commission, which directs airport operations, said late Monday that maintenance staff would restore the 14 plastic holiday trees, festooned with red ribbons and bows, that were removed over the weekend because of a rabbi's complaint that holiday decor did not include a menorah.

Airport managers believed that if they allowed the addition of an 8-foot-tall menorah to the display, as Seattle Rabbi Elazar Bogomilsky had requested, they would also have to display symbols of other religions and cultures, which was not something airport workers had time for during the busiest travel season of the year, Airport Director Mark Reis said earlier Monday.

Port officials received word Monday afternoon that Bogomilsky's organization would not file a lawsuit at this time to seek the placement of a menorah, Davis said in a statement.

"Given that, the holiday trees will be replaced as quickly as possible," he said.

Davis added that the rabbi "never asked us to remove the trees; it was the port's decision based on what we knew at the time."

There were no immediate plans to display a menorah, airport spokesman Bob Parker said, saying restoration of the trees was expected to take place overnight Monday.

"A key element in moving forward will be to work with the rabbi and other members of the community to develop a plan for next year's holiday decorations at the airport," the port statement said.

The rabbi has also offered to give the port an electric menorah to display, said his lawyer, Harvey Grad.

"We are not going to be the instrument by which the port holds Christmas hostage," Grad said, emphasizing the rabbi never sought removal of the trees, but addition of the menorah.

The rabbi had received "all kinds of calls and emails," many of them "odious," Grad said, adding he was "trying to figure out how this is consistent with the spirit of Christmas."

* from Questions & Answers: Cockles are a type of bivalve mollusc, once a staple part of the diet for many British people (you may recall that Sweet Molly Malone once wheeled her wheelbarrow through Dublin’s fair city, crying “cockles and mussels, alive, alive oh!”). They are frequently heart-shaped (their formal zoological genus was at one time Cardium, of the heart), with ribbed shells.

After this piece appeared in the Newsletter, James Woodfield pointed out that there is another possible explanation. In medieval Latin, the ventricles of the heart were at times called cochleae cordis, where the second word is an inflected form of cor, heart. Those unversed in Latin could have misinterpreted cochleae as cockles, or it might have started out as a university in-joke. Oddly, cochlea in Latin is the word for a snail (from the shape of the ventricles—it’s also the name given to the spiral cavity of the inner ear), so if this story is right we should really be speaking of warming the snails of one’s heart.

they decided to take down ALL the tress and decorations just so they couldnt put up a hannukiah (menorahs are for the sabbath)?

That's what they decided. Which, I think they knew, would create a backlash against the rabbi.

I feel it was thinly-disguised anti-Semitism using the excuse that if "they included a menorah, they'd have to put up every single religious symbol." Most religions don't worry about stuff like that, but if someone DOES ask to be included, then they should allow it.

BTW, I used the word "menorah" because the rabbi's attorney was quoted as saying that in the story.

Thanks for the enlightenment, anonymous. I didn't know it was a hannukiah, either.

And yes, B.A., I can't get the lack of generosity of spirit - why not put up a hanukkiah? So as many people as possible can feel hope and warmth in their hearts at the holidays? I mean, what wouldit COST these SEATAC officials to be generous?

I'll tell ya, if the blogosphere called them out on their anti-semitism, it would be a good thing.

SEATAC, you get the Scrooge McGrinch Wet Blue Blanket of Hopelessness award.