Reid would "go along" with more Iraq troops

Here we go again; is it too early to start a campaign for a Democratic challenger in Nevada?

Reid: 'Sure, I'll go along' with short US troop surge in Iraq 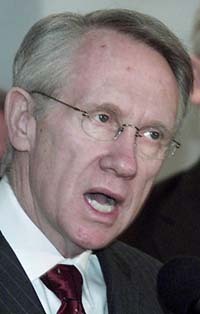 During a Sunday morning interview on ABC's This Week with George Stephanopoulos, incoming Senate Majority Leader Harry Reid (Nevada, Dem) indicated that he would back a short-term surge of more US troops sent to Iraq, as reports indicate that President Bush may be contemplating such a plan.

Reid said that he'd "go along" with such a plan if it's "part of a program" to get the United States out "by this time next year."

Great, just what we need...another Democrat who goes along with the President's "plan" for escalation.

Were none of these idiots paying attention to what went on in Vietnam?

"If it's for a surge, that is, for two or three months and it's part of a program to get us out of there, as indicated, by this time next year, then, sure, I'll go along with it," Reid said.

And this comes the same day that Colin Powell said this:

Powell, also a former Chairman of the Joint Chiefs of Staff, said he did not see the military benefit of flooding Baghdad with American troops.

"I am not persuaded that another surge of troops into Baghdad for the purposes of suppressing this communitarian violence, this civil war, will work," he said, adding that the Iraqi government and security forces must take over.

The real truth is the military is broken and we don't have any extra troops to send! Why Reid feels he has to give even an inch to these warmongers is troublesome.

If only Colin Powell stuck to his “Powell Doctrine” that he created for the first Gulf war, we wouldn't be in this mess! I'm glad he's finally speaking out because he owes big time on this mistaken war!