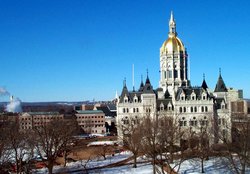 The election is finally over, and as 2006 winds down I'm looking forward to 2007 with some modest measure of optimism. It's been quite a while since I've felt this way.

Here in Connecticut, we have an historic opportunity to initiate some real progress. The State Senate and House Democrats have gained a veto-proof majority in this year's election, and move into the 2007 session as a potential unified voting block. This is possibly the most powerful tool a legislature can have.

But will they use it?

There are many critical issues facing the new legislative session, and the super-majority power will provide an opportunity for the Democrats to make some real change. If they can work together.

Issues like energy, health care, taxes, etc., which need to be addressed and corrected.

But will the Dems have enough sack to stand up to the inexplicably popular Governor Jodi Rell and make those changes?

Or will they introduce watered-down and compromised bills that fail to respond to those important issues with any real progress?

Senate Majority Leader Martin Looney (D-New Haven) is already talking about compromise, which is worrisome at this point because there isn’t any legislation on the table yet, and we all know how little compromise there is when the Republicans are in power (very little or none; see US Congress 1994-2006 for examples).

Quote from the New Haven Register this morning:

Don’t give away the store before you even open the doors, Martin. Hold your cards close to your chest and wait to see what develops.

House Speaker Jim Amann (D-Milford; but you already knew that) has an unprecedented occasion to lead the House in creating true social and economic reforms. The opportunity he’s been given by the people of Connecticut should and must be used to enact the progress that is so sorely needed.

But Amann tends toward the conservative edge of the Democratic party, and the many important social issues that face us may be held in check if he fails to lobby for true reform. We’ll have to wait and see what happens.

I present to you this cool site about
and

May be its help you to find him...