Well, that was fast! 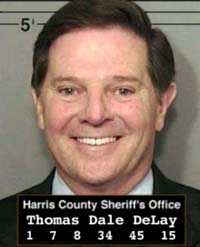 Today indicted former Majority Leader Tom DeLay joined the online community with a blog of his very own.

(and as an aside: can that picture be accurate? Is "The Hammer" REALLY only 5 foot 2 inches tall? That would make him nearly a dwarf...and explain a LOT!)

From THIS ARTICLE at Rawstory.com:

Former Texas Congressman Tom DeLay, who resigned as Republican Majority Leader after being indicted on state campaign finance charges, formally launched a new "career" as a blogger on Sunday.

And like many writers on the Internet who toil without an editor's aid, the "Hammer-turned-blogger" proves susceptible to occasional misspellings and awkward use of grammar.

"Friends tell us that the powerful former House majority leader, dubbed the 'Hammer' for his tough persuasion tactics, this week unveils TomDeLay.com, where he'll blog—DeLay's Daily—on newsy issues and build a coalition he's calling Grassroots, Action, and Information Network," Paul Bedard wrote in Friday's Washington Whispers column. "Sources said the right-leaning Texan will give gain members insider information on the conservative movement and urge them to step in on key issues."

Bedard warns Democrats not to "apply," since DeLay's site will be designed to filter all undesirables out.

DeLay's site isn't, technically, a new one, as the same address previously served as the home for the Tom DeLay for Congress campaign.

Sunday's first political post at TomDeLay.com slams Jimmy Carter - "perhaps our nation's worst President" - for blaming "the problems in the Middle East not on Islamic extremism, but on Israel" in his new book Palestinian Peace, not Apartheid, which the budding blogger misspells as "Aparthied."

Comments Disabled - At the time of this article's publication, there was an open comment thread at DeLay's blog, but sometime early Sunday evening the commenting function was disabled. In addition, DeLay's three initial posts at the blog were removed, with no explanations given for the removals.

However, as the way things usually happen on the Internet, someone managed to save a copy of DeLay's first post, which was then published on a new blog, where it still retains a number of objectionable comments which may have shut down the once-open threads.

Some commenters had either mockingly or fervently expressed hope that the former Republican Congressman would be convicted and then raped by other inmates in prison, while others liberally threw around the f-word.

Hmmm...while Tom's blogroll includes conservative hacks like Malkin and LGF, so far there's no "Opponents List"! If there was, you KNOW ol' CT Bob would be doing everything humanly possible to get onto it.

I noticed the other day that you Blogrolled my Blog. Thanks! I have had yours on mine since before the elections. I also had to laugh when I noticed your "Distinguished Adversaries". lol

I think that just the fact that they haven't deleted any of my comments on the FIC Blog, as harsh as some of them are, suggests that they may not be completely unreasonable. They are probably ecstatic at their new hits from the left.

I missed the Delay site by a hair... I tried to click in just after they shut it down. I missed all of the fun! If FIC thought I was unreasonable, well, al I can say is that they would call me satan if they read what I was going to say to DeLay. lol

suspended commenting? Well of course he did...You complain about trolls on this blog imagine what he would have to deal with.

You don't have to imagine...click on the link I posted to the blog WITH the comments to see. It's a riot.