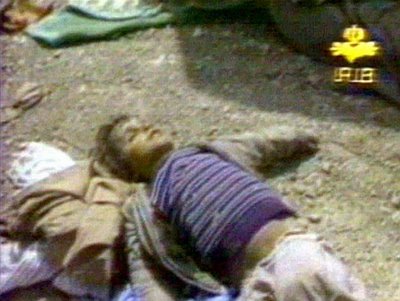 (A Kurdish boy lies dead in northern Iraq after a poison gas attack on his village by Saddam Hussein's troops in 1988.)

BREAKING NEWS: After a frantic "death watch" quickly put together tonight on the TV news, Saddam Hussein's final act has drawn to a close. Arab news organizations are reporting his execution just a few moments ago.

Hussein is said to have been hung between 6:00AM and 6:08AM Iraq time. There weren't any WMDs in Iraq, but there WAS a genuine "bad guy" they managed to catch and kill. It's probably the only thing that's gone right as far as Bush's involvement in Iraq goes.

But, judging from his track record, if George W. Bush was in charge of the autopsy, he'd probably find a way to fuck it up and Hussein would come back to life!

Hussein, should he actually stay dead, is reported to have requested burial in Yemen until such time as Iraq is "liberated", and his corpse can be reinterred in Iraqi soil. I'm not sure why he considers Yemen a "friendly" option, but obviously he feels they're sympathetic to his regime.

(...and get ready for the conspiracy nuts who will claim that the Iraqis executed one of Hussein's many doubles in his place! see below:) 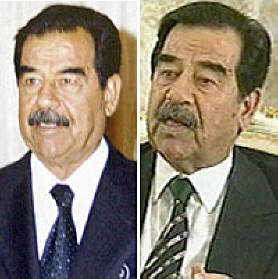 And, in the event that it really WAS Saddam Hussein who was executed, I wonder where he'll spend eternity?

Somehow, I don't see Allah embracing him with open arms;
Jesus probably isn't a big fan of the guy;
Buddha isn't even returning Saddam's phone calls;
and Krishna is shopping at the mall...

Hmmm...could those guys from South Park be right?

OK George, you got your boogeyman at last. NOW can we start looking for Osama bin Laden?

You remember him, doncha, George? He's the guy that actually killed Americans on American soil.

I'm not sure what to believe, there are several mighty fishy aspects to the Saddam saga. Especially after the Pat Tillman and Jessica Lynch revelations...Nice double photo, I got one too. We've all seen both of these guys.

Don't mean ta sound like one of those conspiracy nuts, but the American People deserve to know who the actor is.

So we're the police of the world now? OK, that means you want to send troops to anyplace people are being murdered by their government? Piss off, stupid.

We need to go after the guy who killed American civilians in our front yard first; then we can clean up the world. Of course, you'll have to enlist to help out, because we'll need hundreds of thousands more troops. goarmy.com

Hello My Name is Bob

"His name is Robert Paulson..."

Great flick. If you loved "Fight Club", you gotta check out Marla - The Movie

...After the Gulf War of 1991, when Shiites and Kurds rose up against Saddam Hussein, the Bush senior administration sat back and allowed the Baathists to fly helicopter gunships and to massively repress the uprising. President GHW Bush had called on Iraqis to rise up against their dictator, but when they did so he left them in the lurch. This inaction, deriving from a fear that a Shiite-dominated Iraq would ally with Tehran, allowed Saddam to remain in power until 2003."

This last one really kills me, Chele...if George I had finished the job back in '91-'92, he could have spared untold thousands of lives, both Iraqi and American, and saved the US the massive expense and loss of international prestige that this 2nd Gulf War has cost us. We had the whole world working with us, and Bush lost his nerve at a critical juncture. Who knows what Iraq could have become had it been properly handled back in the '90s?

I don't think I'll feel all that bad when Daddy Bush croaks.

Yeah, Bush-the-Poppy could have "finished the job." At the very least it would have saved the world having to deal with the Bush family's Oedipal issues and other disfunctions.

But what gets me is that our foreign policy seems to always entail setting up and backing despots around the globe, usually against the will -- and to the detriment of -- their own people. We aid and abet (and often institute) torture, murder and economic disparity and we excuse and defend it in the name of "anti-Communism" or "anti-Socialism" or "anti-Terrorism" or "anti- Islamofascism." Then, when the people revolt and replace or attempt to replace OUR tyrant, we're suddenly shocked!! that they hate us as well.

We've done it in Asia, Europe, Latin America and the Mideast, and it's endlessly stupid as well as politically and morally bankrupt. It doesn't take a genius to realize that when 1% of a country oppresses the other 99%, eventually that 1% is going to fall in a bloody mess. Yet we always back the 1%, and always end up being part of the bloody mess.