You may call me "Reverend Bob" now.

The good folks over at the Family Institute of CT have opened my eyes with their message of faith and...more faith.

So I've decided to join the flock and become a certified Minister. 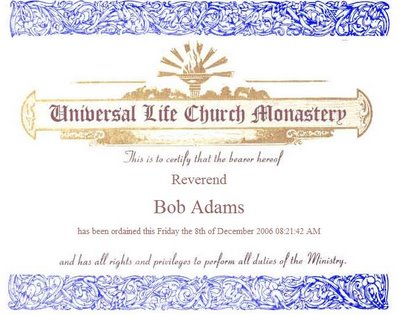 I may now register with the state of Connecticut as a legally ordained Minister of the Universal Life Church. As such, I'll be authorized to perform gay civil union ceremonies in accordance with state law. The statute is as follows:

Who may join persons in marriage. Penalty for unauthorized performance.

(a) All judges and retired judges, either elected or appointed and including federal judges and judges of other states who may legally join persons in marriage in their jurisdictions, family support magistrates, state referees and justices of the peace may join persons in marriage in any town in the state and all ordained or licensed clergymen, belonging to this state or any other state, so long as they continue in the work of the ministry may join persons in marriage. All marriages solemnized according to the forms and usages of any religious denomination in this state, including marriages witnessed by a duly constituted Spiritual Assembly of the Baha'is, are valid. All marriages attempted to be celebrated by any other person are void.

So, anyone who wants to be gay civil-unionized out there, just let me know. As soon as I complete the paperwork, I'll be able to perform a legally binding ceremony.

By the way, where's Mary Cheney these days?

Praises Be! More important than the performance of civil unions, you now have the right to scold Joe Lieberman on God's behalf.

I look forward to the completion of your Blog trinity with the addition of the "Reverend Bob" site.

Nice idea on the Lieberscolding...

Glad to see they accept truly everyone, even us atheists. ;-)

To bad you didn't become ordained last month. You could have officiated at my wedding. :)

CGG, wow, that would have been a great honor. But I only do gay marriages.

Hey, we're living in an age of specialists! LOL!

OK. I'm in, but first I have to get divorced from my male mate and then I have to find a woman who likes me and then trick her into loving me and agreeing to marry me, and then I have to introduce them to you, CTBob. Seems like a lot of work, but I will get started on it right after tonights Demoquacks vs Repooplicans Bowl-a-thon.

Let us know how you guys did tonight...I had to go to a party, or I would have rolled a couple of 200s for ya's!

Keep up the good work, and I hope you make a lot of money...after all, thats whats life is about. Right?