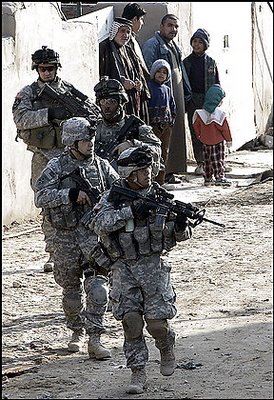 Lieberman Watch: In this Washington Post opinion column, Senator Lieberman reiterates his call for more troops on the ground in Iraq. He makes a very lucid and pursuasive case for increasing troop levels.

We already won the war (Saddam was deposed; we confirmed there are no WMDs), but we're losing the peace. There is simply NO WAY any foreign military force is going to successfully police a nation of 27,000,000 when they don't want us there.

That's what Lieberman refuses to understand.

And every day he fails to see the obvious truth, more Americans die.

...While we are naturally focused on Iraq, a larger war is emerging. On one side are extremists and terrorists led and sponsored by Iran, on the other moderates and democrats supported by the United States. Iraq is the most deadly battlefield on which that conflict is being fought. How we end the struggle there will affect not only the region but the worldwide war against the extremists who attacked us on Sept. 11, 2001.

Here's another pathetic, grasping attempt to link the mess we created in Iraq to 9/11. Joe, wake up! The 9/11 terrorists had no connection to Iraq.

This bloodshed, moreover, is not the inevitable product of ancient hatreds.

No, that's exactly what it is.

Iraq is a nation made up of three distinct and separate ethnic/religious populations. Much like Yugoslavia, when the unifying yet brutal regime of Tito ended, the region immediately descended into ethnic chaos and hatred.

This is exactly what is happening in Iraq now that Saddam Hussein is gone. We simply traded a brutal regime for brutal anarchy. It's too late to remedy that situation. If we try, we'll only waste more American lives and billions of dollars, and succeed only in making the Middle East a more dangerous place.

This is what Joe Lieberman refuses to acknowledge. He's perfectly willing to sacrifice those American lives and resources simply to avoid admitting he was wrong.

Funny how none of his family is in the military. Why are the biggest chickenhawks usually the biggest cowards?

I'd like to point out that Holy Joe invokes 9/11 in his first paragraph.

How we end the struggle there will affect not only the region but the worldwide war against the extremists who attacked us on Sept. 11, 2001.

Here's what Gavin at Sadly, No! said. As you can see in the comments, I completely agree. Shame on Joe Lieberman.

Yeah, I had to resist the temptation to quote the entire article; Joe invoked some form of the word "terror" six times in his column.

As if repetition makes it right.

To quote Tim Tagaris referring to Joe Lieberman: "What a dick!"

Bob, thanks for keeping the war front and center because it is so important that this issue not be swept under the rug just because the Democrats are now in power. The only way we're going to end this STUPID war is to cut off funding and I don't know who in power has the guts to do this besides Dennis Kucinich.

Joe is nothing but a spineless coward and I wonder how many voted for him who are against this war and thought he was too? It just makes me sick to look at him, to hear him and to know we're stuck with him for another six years...ughhhhhhhhhhh!!!!!!!!!

Joe may be a lost cause, but we can put the pressure on Chris Dodd and the other candidates who have the desire to be President, or the Democratic leaders who want to keep their Congressional seats in 2008!

On January 27, I plan to join the massive march in Washington DC against this war. If anyone is interested in this march, here’s the website for more information: http://www.unitedforpeace.org/

Thanks for keeping us current. I've avoided newspapers this week. Instead, have been reading a bio on H.L. Mencken who coined the term "boiboisie" for the masses who swallow the drivel from politicos and moralists like Lieberman.

Harriet -- thanks for the heads up on the march -- I hadn't heard about it.

Harriet, my biggest fear is that the Democratic Congress will fail to really stand up to Bush's war policy and continue the enabling. There have been ominous rumblings from too many Democrats lately for me to feel overly optimistic.

Just because we won doesn't mean that we'll back off. When we see some concrete results, THAT'S when we'll cut them some slack.

Not a minute earlier.

Oh, and Harriet, the march in DC is on my birthday. Please remind me to post something about the march's website after the New Year, and I'll see if I can help drum up some support.

BTW, Keith Olbermann and I share the exact date of birth. We'll both be 48 in a month...if you can believe the biographical data of those cagy show-biz types!

I just read Glenn Greenwald, and he points out that in his op-ed, Joe Lie is linking Al-Qaeda and Iran. Joe wants us at war with Iran, too.

This is a significant escalation beyond the escalation of the failed occupation of Iraq.

How fitting that you and Keith Olbermann share the same birthday -- who else could keep such good company with you? For sure I'll hog someone's MSM camera so I can send you a National birthday greeting from DC!!!!! BTW, why don't you and Joyce celebrate your birthday by coming to DC and march for something you really believe in...or are you planning on going to some beautiful island to sail???

Once again CT Bob and gang continue to think they are experts on middle east relations. Thank god they just operate a local blog and not any office in government.

I think your Lieberman Watch is becoming redundant. Get over it, the majority of CT voted for him, respect our decision

I love how you "anonymous" can't get enough of my blog. Thanks for the hits; you're helping drive this blog towards national status. And did you enlist yet? We're gonna need a lot more troops before Joe is done with this war!

Harriet, I'd consider going, but it's really cold in January, even in DC; if we're going to take a weekend off, Joyce deserves to go somewhere warm!

There is something eriuosly wrong in the State of Connecticut.
How is it that the Rell gets elected as though she is the second coming of the Madona? This is a woman whose greatest claim to fame is that she had no idea of what was going on all around her during the Rowland years.
Then to reelect Lieberman even though he is making Barry Goldwater look like a peace candidate.
Who knows maybe there's something in the water?

Ding Dong The Anonymous Neocon said: "Once again CT Bob and gang continue to think they are experts on middle east relations. Thank god they just operate a local blog and not any office in government."

OK... If all of us foreign policy wonks aren't good enough for you how's about this one:

"Zbigniew Brzezinski -- who believes we should withdraw in order to trigger a round of stabilizing deal-making between the chief thugs inside Iraq -- suggested in January 2005 that it would take 500,000 troops to occupy and stabilize Iraq. After considering the crimes at Abu Ghraib and Guantanamo and the collapse of America's moral prestige, Brzezinski said that not even that number of troops might succeed."

Unless your name is Noam Chomski I know you have nothing of value to say in order to rebut that quote... Or the rest of us, for that matter. lol