But what about the war? 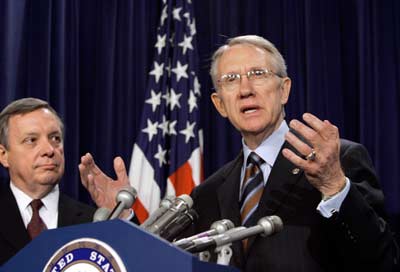 Congress is back in session, and Harry Reid mapped out the first 10 bills the Democrats will introduce. While these are much needed reforms (especially S.10; I'm a firm believer in "pay as you go"), he didn't mention any specific plans for getting us out of Iraq.

I wonder if he's waiting to see the public outcry in response to the Bush speech scheduled for next week. I can't help but think that timing is going to be a big factor in the success of any proposed Iraq withdrawal plan.

Washington, DC — Senate Majority Leader Harry Reid introduced the top ten Democratic Leadership bills. Next week, the Senate will begin work on the first of them—ethics reform to clean up Congress and make Washington work for America again. With a spirit of bipartisanship, Senate Democrats are ready to start moving America forward. The three day week in Washington is over—now the Senate is going to get to work.

S. 1, our plan to change the way Washington works. It was late 2005 when scandals involving lobbyists and lawmakers shocked this nation, and despite the Senate’s best attempts, here we are—two years later—and still, there has not been reform of ethics, lobbying, and earmarks.

S. 2 is our plan to increase the wages of working families by raising the minimum wage to $7.25 an hour.

S. 3 is our plan to reduce drug costs for seniors.

S. 4 is our plan to make America safer, by fully implementing the recommendations of the 9/11 commission.

S. 5 is the “Stem Cell Research Enhancement Act of 2007.” It is legislation we seek to pass, so that some day American scientists may find cures for diseases like Parkinson’s and Diabetes.

S. 6 is our plan to promote energy independence, so we can enhance America’s security and begin to deal with the threat of global warming.

For too long, our country’s energy policy has had only one concern: oil company profits. We’ve allowed Exxon’s bottom-line to take priority over families struggling at the gas pump and the harmful effects of global warming.

S. 7 is the “College Opportunity Act of 2007” – our plan to make college more affordable for middle-class families.

If we want real security in America, we must rebuild the U.S. military and ensure it remains the best fighting force in the world.

Finally, S. 10 will reinstate “pay as you go rules” to the budget process.

As everyone knows, the Senate used to operate under a rule called “pay as you go.” This simple proposition demanded that when we increased spending—or cut taxes—we paid for it. It is a common sense principle that families all across America practice. PAYGO was in place here in the Senate in the 1990s, when our country experienced unprecedented levels of economic growth.

Unfortunately, this rule disappeared in recent years, and the results have been disastrous: 9 trillion dollars of debt, the largest deficits in history, foreign debt that has more than doubled, giving countries like Saudi Arabia and China unprecedented control of our economic destiny.

Yes, what about the "war" (sorry, but I'm not going to allow a propaganda term to frame my thinking, when I know that it's really an Occupation harassed by a really determined Resistance)?

What goes down in the next few weeks and months will be very telling. The fact that the situation that inspired BA to post this story occurred could be said to be telling already. By not going there they have spoken.

Sorry. I couldn't fit "Occupation harassed by a really determined Resistance" in the title, so I called it a "war". But you're right.

I'm sticking with my feeling that the Dems are waiting to see what sort of response Bush's speech gets next week. Watch for a Democratic bill to get introduced that reflects popular opinion of the speech.

And I wouldn't be surprised to hear Bush tone down his call for the "surge", since just about everyone this side of completely batshit insane agrees it's a bad idea. He might not be a good President, but he's a good politician (in the worst sense of the word).