Lamont party wrap-up in the Indie 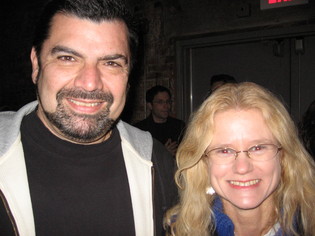 Allan Appel wrote a nice recap of the big Lamont party for the New Haven Independent, and included this photo of Joyce & myself. This is from the article:

Video blogger Bob Adams (shown with his wife Joyce), aka "CT Bob," said the war continues to be a big focus of his interest, but that he particularly wanted to keep a bright light on the debate over health care. Adams said he had within the last few days alone interviewed Rosa DeLauro, Ken Krayeske, and Senator Lieberman.

“Well, I don’t see him much,” she said, “and sometimes he forgets to take out the trash.”

For the record, I always remember to take out the trash...when she reminds me! 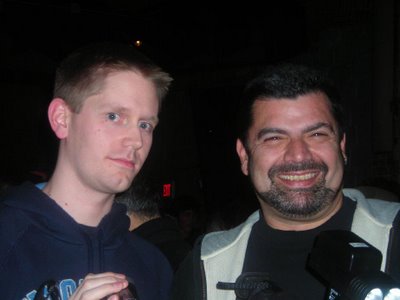 UPDATE: Harriet sent me this photo of Spazeboy and myself, obviously taken shortly after Ned's speech since we're both holding our video cameras.
Posted by CT Bob at 1/13/2007 09:46:00 PM

Well, Bob, Joyce is a very wise woman and she's just trying to remind you that even with success there's ALWAYS trash to deal with!

And I thought I was the only one to never forget to take out the trash because my woman reminded me.

That's a really nice picture of you and CT Joyce.

Must have been right after you were shooting -- look at how big Beau's pupils are!

Matt, it was just after shooting. This picture was taken moments after the scene in the video where I turned my camera on him while he was shooting me.

I just looked at Spazeboy’s "wish list" and found out we share the same birth day (6/11) and even though we are generations apart, our worlds are parallel in having to deal with a government so similar that launched another senseless war. When will we ever learn from history, instead of just repeating it?

Harriet asks: "When will we ever learn from history, instead of just repeating it?"

I never thought we'd revive a production of the old Vietnam-era script so soon after it was widely panned, but here we are.

Let's hope that when we check the blogs in the summer of 2036 we won't find a diary entitled, "Senator Spazeboy Urges Support For President Jenna Bush's Latest Preemptive War!"

Well I hope not to be in a nursing home by then, but should Jenna Bush follow in her father's footsteps, I would hope that "Senator Spazeboy" would be deeply involved in setting up the Impeachment hearings against another insane Bush presidency -- gawd just the thought of another Bush presidency (no matter what gender) is too painful to even pretend!

Joyce is a lovely lady, Bob. You should remember to take out the trash. *wagging finger*