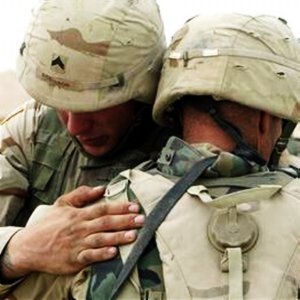 This story really makes me sad...

The Department of Defense reports that suicide has become a huge problem with US forces deployed in Iraq. It appears that 2006 will become the deadliest year for suicides since the war began, with more than one in four non-combat deaths being self-inflicted.

Why doesn't our government see that there is something wrong here?

The pointlessness of the mission is becoming toxic to our brave soldiers. Military personnel are being forced to redeploy to Iraq when they obviously have mental problems. The government is loading them up on tranquilizers and anti-psychotic medications and sending them back, when it's obvious they critically need treatment.

And soldiers are suffering at the hands of other military personnel, with nothing being done to remedy the situation.

Here are some excerpts from this heart-breaking story in the Hartford Courant:

Among the 2006 confirmed suicides was Tina Priest, a 21-year-old soldier from Austin, Texas, who killed herself in Iraq after reporting she was raped by a fellow soldier and then being placed on antidepressants, investigative records obtained by The Courant show. An Army psychologist deemed her stable just days before her death.

Investigative records show that Priest shot herself in Iraq in March, days after being diagnosed and treated for "Acute Stress Disorder consistent with Rape Trauma Syndrome." The records show she was prescribed the antidepressant Zoloft, the antipsychotic Seroquel and the sleeping aid Ambien.

Her family reported that she was in good spirits before her deployment, the records say. But friends and relatives told investigators that Priest's mental health declined sharply after the rape, and particularly after the soldier she accused was not confined pending his trial.

"Priest stated that she can't do it anymore, that she just wanted everything to be over with," a fellow soldier told investigators, recounting a conversation with Priest days before her death.

In any other situation, Priest's statement "...that she just wanted everything to be over with..." would immediately trigger a sane and compassionate response, such as getting her the help and protection she desperately needed.

But because of the intrinsic lunacy of our wartime policies, Priest was loaded up on medications and returned to active duty. While her attacker roamed freely.

Is it any wonder that Tina felt she didn't have any other way out?

Words can't adequately express my anger about how our broken government allows things like this to happen.
Posted by CT Bob at 1/31/2007 09:05:00 AM

You would think that the army would discharge her or do something to compensate her. This is bullshit!!

And I am sure that none of these poor souls are included in the death count. What else could these deaths be but combat related? And of course, there are the injured who die weeks or months after being removed to a hospital -- they aren't counted either. I would love to know the actual count of the number of brave men and women have died for this debacle.

This is rediculous! This story doesn't mention that after the "alledged" rape, they took her bullet's away. That's right she didn't have bullet's, then how did she kill herself? Further more, without bullets she was left unable to protect herself from her "alledged" attacker- that was not at any piont detained.(fact) So, (if her story were true) she was left knowing that at any moment she could possible be attacked again, the army did nothing to protect her, they simply medicated her, (heavily)deamed her stabe but yet... (Zoloft, antiPSYCHOTICS, and sedatives???) Would a stable person be in need of this type of medicating. Sedidatives, no bullets, acusations of rape, nearly a week later she found dead. c'mon? sure would make her an easy target.. sound asleep with no protection, after reporting allegations of rape. she was found dead in her bed. Something most people would not know is that tina had an identical twin that she had spenting every day of her life with, until she sign up for the U.S. army, of course. Tina would never have done such a thing to her sister, much less the rest of her family. I am almost sure that when she stated she "just wished it was over" she meant the investigation of her attacker, not her life. Tina did not kill her self, and eventually i will repost expiaining excsaclty how i proved it.

There is rape history here. Her father ,Tim, is convicted meth cook. When Tina was in her teen years, he would slip her girlfriends that stayed over a roofie, and rape them. She always stood by her dad, calling her friends liars. This is just a sad story. The guilt that poor girl felt after her attack and seeing the man that raped her walking free, just as her dad walked free around Smithville after the rapes.
She must have felt what her girlfriends felt. I think that was too much for her. Direct your anger at the meth. Meth has fingers that touch that family, the community, the state, the country, and Iraq.

this was my friend and if anyone knew her they would know how this would affect her. And for the soldier roaming around freely i hope karma bites you in your ass!!!!

fleoli point of view
when america loose his soul what could we expect from our army ,torture,rape ,crime ,bribery ...
when ours politicians talked about god and the faith they have to make our soul fragile and receptive even to go for a bloodsheld what are you expect:be on the right side of the axe and win your seat in paradise,god if he existed was not that sort of lame duck citizen, god was certainly not approve the cowboy attitude of white population because he kown where is lead this stance.nostalgie is the fastest way to facism but we are already on these tracks,bye bye american dream and don't forget it's the religious stance who brought the maximum wars on earth.