Can we stop this crazy stuff already? 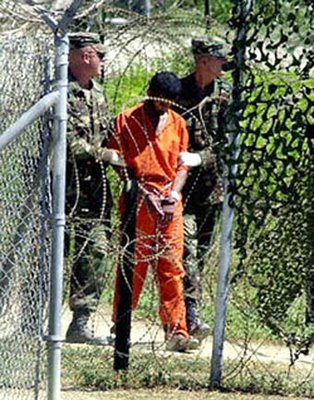 This acticle is exerpted from CNN.com:

"On several occasions witnesses saw detainees in interrogation rooms chained hand and foot in fetal position to floor with no chair/food/water; most urinated or defecated on selves and were left there 18, 24 hours or more," according to one FBI account made public. One FBI witness saw a detainee "shaking with cold," while another noted a detainee in a sweltering unventilated room was "almost unconscious on a floor with a pile of hair next to him (he had apparently been pulling it out through the night)."

Another witness saw a detainee "with a full beard whose head was wrapped in duct tape." One FBI statement said that an interrogator squatted over the Quran and that a German shepherd dog was ordered to "growl, bark and show his teeth to the prisoner." Another detainee was draped in an Israeli flag.

When will we start treating these prisoners like humans? And don't give me that bullshit "well, they killed our guys without due process" excuse because these people haven't been convicted of anything. Hey, if they're tried and convicted of terrorism, they deserve to be sentenced and serve their time.

How will this nation ever regain the moral high ground that George Bush's administration has lost us?

Placing a detainee in a darkened cell with the intent of interrogating him for 24 hours straight; the witness reported being told that former Defense Secretary Donald Rumsfeld had approved this technique.

Keeping detainees awake for days on end with strobe lights and loud music.

Dressing as a priest and "baptizing" a detainee.

Subjecting a detainee to a lap dance by a topless female guard.

Interrupting detainees' attempts to pray by putting fluid on their faces and telling them it was menstrual blood.

Beating a detainee who said he had recently undergone abdominal surgery.

Why does it make so much sense to George Bush and his cronies for our government to become the very people they're supposed to be defending us against?
Posted by CT Bob at 1/02/2007 10:45:00 PM

"Why does it make so much sense to George Bush and his cronies for our government to become the very people they're supposed to be defending us against?"

Folks, a good analysis of their plan is here for anyone who cares to study it:

"Why does it make so much sense to George Bush and his cronies for our government to become the very people they're supposed to be defending us against?"

You're hysterical - to you there is an absolute moral equivalence between "dressing as a priest and 'baptizing' a detainee" or touching a detainee's face....
and sawing off a live human being's head with a knife while chanting orgasmic paens to Allah?