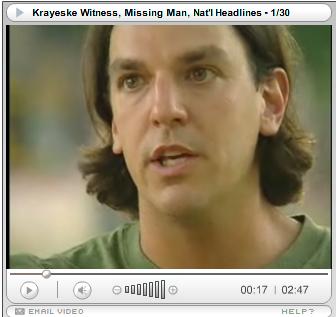 Image from Fox-61's News Webcast
At his hearing today, Ken Krayeske pleaded "not guilty" to the charges and his case is being continued until March 2nd, and a new witness apparently stepped forward to say that Krayeske didn't even approach the governor.

I'm kind of shocked that they didn't simply drop the charges, but I guess that would be some kind of admission of their guilt, so they're going to try to stick to their guns. Which means this entire situation may become a bellweather "freedom of the press" issue.

And in turn, it may result is serious political damage to Governor Rell.

CT Blogger over at ConnecticutBLOG posted this article and video earlier today:

Finally the lies will be exposed.

Today starts the beginning of freelance journalist/blogger Ken Krayeske's trial. This morning, supporters on Krayeske held a rally in his honor outside Hartford Superior Court. Channel 8 was on the scene and filed this report.

I posted the reports from Channel 3 and 30 a few minutes ago.

I'll catch Fox 61 and get that posted tomorrow morning.