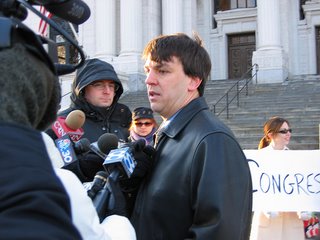 This is an extremely interesting quote from this Krayeske story in the Hartford Courant late today:

State Public Safety Commissioner Leonard Boyle Monday wrote a report defending state police security preparations that included Krayeske among about 10 other individuals -- the rest of whom have not been identified -- "who, because of prior actions or statements, warranted interest if they appeared at the day's events." Boyle said the decision to arrest Krayeske Jan. 3 was completely the responsibility of the Hartford police.

Last week, Hartford police Chief Daryl K. Roberts said Krayeske was arrested not because of the flier, but because he "breached the parade route" -- a charge that Krayeske and at least one other witness already had denied before Nichols surfaced Tuesday with her account.

Apparently there really IS a list of individuals pinpointed for special attention due to their "prior actions", or even "statements(!)" they've made. Its existance has been publicly denied previously.

So, a list was made by the authorities using state resources, then distributed to law enforcement agencies with the express purpose of targeting persons for political reasons without due process or legal justification. I'd sure like to see that list, and find out who are the rest of the "Connecticut Ten".

Of course, the state is going to insist of drawing out this farce to the bitter end.

What an utterly stupid waste of state funds and resources! 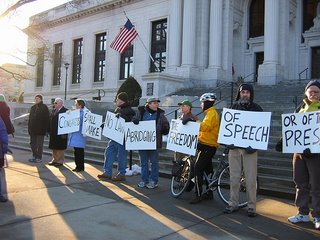 UPDATE: Apparently, Hartford Courant columnist Stan Simpson is happy with the Hartford P.D.'s actions, and seems to accept the police department's story at full value. I can't imagine any thinking person taking this tack, especially in light of the outrageous handling of the case which proves (to me, anyway) that they are trying to hide something. I guess Stan is fine with the prospect of being stopped, searched, and possibly arrested if he shows up at a parade and his face is on a flyer the police were given.
Posted by CT Bob at 1/30/2007 09:16:00 PM

No, CTBob, it's NOT the "CT10" -- it's the "CTApproximately10" -- is this a backpedaling technique to try not to have to admit what's going on, or is there something super secret about the actual number on the list? What is "about 10"? "About 100" I can see. 10This is not about an estimate made within seconds of pigeons flying by, but of people you have studied the list members well enough to edit and print that list.

What you're saying is true, but I'm tending to accept the number is around ten. His statement kind of rings true; but in any case we absolutely need to know who is on the list and just how and why was it compiled. I think those are the primary issues here. The very fact that there WAS a list and it probably WAS politically motivated is the real scandal here.

And yes, I did call it a "scandal". This thing can become a huge problem for Rell if it's determined that this is a political "hit list".

The fact that they're not dropping the charges seems like the sort of response someone who's guilty of an obvious screw-up would do. Never admit a mistake.

"with the express purpose of targeting persons for political reasons without due process or legal justification" - where's the proof of this statement?

When the governor's office basically sends out a flyer to the PD that works as an "arrest on sight" warrent to target persons without legal reason.

If Ken had made a specific threat to Rell, or had illegally disrupted one of her public events, then it's more justified.

In this case, a "Wanted" poster was essentially issued with Ken's face on it. You don't have to be a genius to do the math.