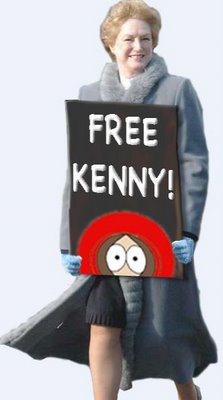 Image by Joebob and KennyK
From Ken Krayeske's website "The 40-Year Plan" (it's not really a blog in my opinion because it doesn't have a comments section...hey Ken, would you consider adding that?):

The Hartford Courant’s Jon Lender and Edmund Mahoney reported on Friday, Jan. 19 that police circulated a two-page color flier of me – little old me – featuring my current and prior drivers’ license photos and a few paragraphs about me - before the inauguRell parade Jan. 3.

The entire episode is hard to fathom: the front page stories, the evening news bulletins, the phone calls from elementary school friends and the massive support from people I don’t even know –firefighters, entrepreneurs, and normal folks who think what happened is wrong.

The funds covered the food and beer at the party and the legal fees for my first four court appearances. I was expecting 40 people and $1,000 at most. The turnout overwhelmed me.

Talking to a friend at law school Monday night, she said that I shouldn’t be surprised that so many people came out. The current presidential administration’s encroachment on our civil rights has people concerned. They are looking for a way to fight back, she said.

After my arrest, Cliff joked with me that I now knew what it was like to be marked, to be black. I know if I was that black teenager, the media coverage I have been getting would be absent.

So on some level, thrust into this surreal situation, I feel a mantle of responsibility not just to myself, but to the people who came out in droves to support me on Friday night, and to the adolescent wrongly incarcerated for his skin color, the injustice of which will never reach the 6 o’clock news.

With that in mind, then, I want to use this train wreck as an opportunity to rally for free speech before my court date, Tuesday, Jan. 30.

So meet me at 8 a.m. in front of the Connecticut Supreme Court building at 231 Capitol Avenue Tuesday morning for 45 minutes. Bring a sign and show that you think the First Amendment matters.

"Congress shall make no law ... abridging the freedom of Speech, or of the press; or the right of the people to peaceably assemble."

Nor shall Gov. M. Jodi Rell, the HPD or the CT State Police.

A few notes about the rally: this is a peaceful rally, so, as Johnny Cash said, don’t take your guns to town. Second, I don’t want to meet at the criminal courthouse because I don’t want to interrupt the daily operation of justice.

For those who want to go into court and watch the proceedings, they are open to the public. Just remember to be on your best behavior, and remember that you will have to pass through a metal detector to enter into the courthouse on Lafayette Street.

In the unlikely event that the state drops the disorderly conduct and interfering with an officer charges against me before the Tuesday, Jan. 30 court date, this rally will be canceled. Check www.the40yearplan.com for more details.