The True Meaning of Freedom 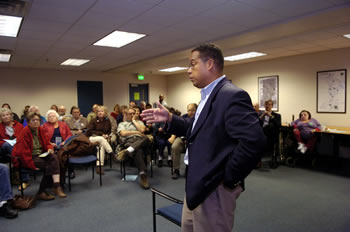 (From The Arab News) WASHINGTON, 5 January 2007 — Congressman Keith Ellison, D-Minnesota, the first Muslim elected to Congress, used a Qur’an once owned by President Thomas Jefferson, and now housed in the Library of Congress, at his ceremonial swearing-in yesterday.

The third US president, serving from 1801 to 1809, Jefferson was a collector with wide-ranging interests. His 6,000-volume library, the largest in North America at the time, became the basis for the Library of Congress. 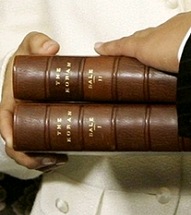 It was acquired in 1815 as part of a 6,400-volume collection Jefferson sold for $24,000, to replace the congressional library that had been burned by British troops the year before, during the War of 1812.

Ellison’s spokesman said Jefferson’s Qur’an dates religious tolerance to the founders of the country, and to make the point that “religious differences are nothing to be afraid of.”

“It demonstrates that from the very beginning of our country, we had people who were visionary, who were religiously tolerant, who believed that knowledge and wisdom could be gleaned from any number of sources, including the Qur’an,” Ellison told reporters on Wednesday. Ellison was born in Detroit and converted to Islam in college.

“A visionary like Thomas Jefferson was not afraid of a different belief system,” Ellison said. “This just shows that religious tolerance is the bedrock of our country, and religious differences are nothing to be afraid of.”

Some critics have argued that only a Bible should be used for the swearing-in. Members are sworn in to the US House of Representatives as a group with no Bibles or other books involved. But in a country where three out of every four people consider themselves Christians, the Bible has traditionally been used in ensuing unofficial ceremonies which, among other things provide each member with a photo opportunity for themselves and their constituents.

Kudos and congratulations to Representative Ellison, a man of class, elected by his constituents who represent a number of races and creeds. Kudos also to Mr. Dimunation, a class act and symbol of librarians across this country who continually demonstrate their bravery in the face of intolerance.

I wish Representative Ellison great success in his duty to his constituents and this country, especially in returning us to the Constitutional standards are Founding Fathers intended.

Don't know how my comment got double posted, but I apologize for taking up the space.

No prob, I usually catch those when I read the comments. I deleted it.

Just from Ellison having the guts to stand up for his beliefs, I admire him. He stood up in a way that serves his personal views without overly inflicting them on others.

Maybe those few over-zealous Christians in Congress can take a hint and learn to chill out a bit.