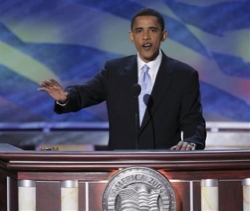 The Raw Story reports that Senator Barack Obama is giving Fox News a bit of the same medicine that the Bush administration freely administered to other news organizations:

According to a "behind the scenes" D.C. blog, Senator Barack Obama (D-IL) has "frozen out" reporters from Fox News Channel.

"Sources tell The Sleuth that the Obama camp has 'frozen out' Fox News reporters and producers in the wake of the network's major screw-up in running with the erroneous Obama-the-jihadist story reported by Insight magazine," Mary Ann Akers writes for the Washington Post blog, The Sleuth.

"I'm still in the freezer," one Fox journalist said, noting that the people at Fox "suffering the most did nothing wrong." (It was "Fox and Friends" host Steve Doocy who aired the Insight magazine piece, which reported that operatives connected to Sen. Hillary Rodham Clinton (D-N.Y.) found out that Obama, as a child, was educated at a Muslim madrassah in Indonesia.)

Another Fox journalist called the network's airing of the story "unfortunate" for the network's journalists who have to cover Obama and who are being adversely affected despite not being involved in the incident.

Since the madrassah incident, Obama has given interviews to ABC, CNN, CBS and NBC -- pretty much every other network except Fox. Sources close to Obama acknowledged that they're not thrilled to play ball with Fox journalists, but they stopped short of saying they are freezing the network out.
#

Yeah, my heart is bleeding with worry about those poor little put-upon Fox News reporters. What ever will they do now that they're being held accountable for their shitty journalism?

Wake up, Fox News, and smell the coffee...

Kudos to Obama. If more followed in his footsteps, there wouldn't be much to report.

FAUX. Does not even deserve to have the term 'news' in the same sentence.