Because of George Bush's useless war while giving tax breaks, and the Republican Congress's insistance on reckless borrowing and spending for the last six years with no corresponding increase in taxation to offset the increasing debt, a government report highlights the inevitability of economic disaster if something isn't done about it. 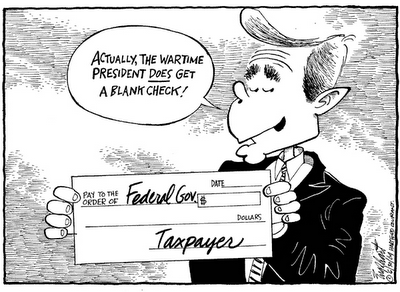 From this article written by Michael Roston in The Raw Story:

In an overlooked hearing last Thursday, the head of (the Government Accounting Office; known as the GAO) warned of looming disaster for America's economy if an effort isn't made to control spending, RAW STORY has learned. Adding that decision-makers in Washington suffer from "tunnel vision" and "myopia," he said that getting the budget under control could even require steep tax increases if action isn't taken now.

The analogy to poor eyesight is no accident when it's so obvious that many politicians lack "vision".

"The picture I will lay out for you today is not a pretty one and it’s getting worse with the passage of time," said David M. Walker, Comptroller General of the United States, in a Thursday morning hearing of the Senate's Budget Committee. "Continuing on our current fiscal path would gradually erode, if not suddenly damage, our economy, our standard of living, and ultimately even our domestic tranquility and our national security," he warned.

In other words, it would result in partial or complete economic collapse of the US within the foreseeable future. This is why I've always been in favor of a balanced budget amendment, which would ensure a "pay-as-you-go" policy.

So far, very few legislators want to back the politically unpopular actions needed to balance our budget. Which can include things like cutting federal programs and raising taxes. Stuff like that can be political suicide to an elected official unless he can successfully explain the need for such drastic measures to the public.

The head of the GAO also warned that if no action is taken now to control government spending, severe tax hikes could be necessary. He stated that, "balancing the budget in 2040 could require actions as large as cutting total federal spending by 60 percent or raising federal taxes to 2 times today’s level."

But in the meantime, we'll be subject to a slowly increasing squeeze on our economy as the debt service payment gets larger and larger.

And yet, a sizable percentage of voters think we can go on like this forever when they keep returning fiscally irresponsible politicians to Congress, because reports like this get ignored by the mainstream media.

Have you taken the right vitamin lately? Is your body answering that question right now? Shocking truth about why this whole food vitamin has set a new standard! This can improve your quality of life.