How to become a "security threat"

"Ma" Rell
Ken Krayeske apparently was placed on a previously unknown "list of potential threats" by Governor Rell, for his alleged acts of blogging and heckling.

Mark Pazniokas wrote an article in today's Hartford Courant, which said in part:

His lawyer says Krayeske apparently came to the attention of state police by heckling Rell during a campaign stop in Glastonbury last year over her refusal to debate his candidate, Clifford Thornton.

"Heckling", as far as I know, is one of our Constitutionally protected freedoms.

OK, maybe not "heckling" per se, which isn't specified, along with "jeering", "laughing", "badgering", "pestering", and "taunting"; but the general, all-inclusive freedom to express one's opinion is clearly protected by the Bill of Rights.

"Hey, tickets to see the Fairy Godmother turn herself into Cinderella are only $150," he wrote this week.

Oh, he was heckling AND ridiculing the governor! OK, we better round up all those dangerous, snarky bloggers.

Uh...wait a minute...if online snark is against the law, then I'm headed for the gas chamber!

"Are there little circles of law-enforcement officers who have lists of who is naughty and who is nice?" asked Krayeske's lawyer, Norm Pattis. "What is the criteria for inclusion?"

Heckling and ridiculing, apparently. No need to answer that question. It's obvious that these "lists" do exist. God help us all!

A Hartford police report released Friday by Krayeske says that state police had given them photographs of activists who might be "possible threats" to Rell, including Krayeske, a free-lance journalist and anti-war protester who managed the Green Party's gubernatorial campaign.

Lt. J. Paul Vance, a spokesman for the state police, declined to comment on how Krayeske came to the attention of the state police intelligence unit or a regional police clearinghouse mentioned in the report, the Connecticut Intelligence Center.

Which is fine, if there are actual, credible threats out there. But it's absolutely wrong to use politically-motivated revenge as a justification for grabbing and arresting an online journalist who is just trying to get a photo of the governor. 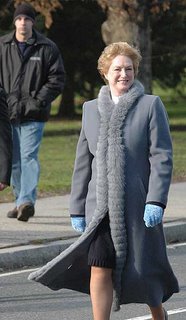 Photo of Rell at parade by Ken Krayeske
Spazeboy's got a detailed post loaded with good links, including Colin McEnroe's interview with Ken's attorney Norm Pattis, so check it out.
Posted by CT Bob at 1/06/2007 07:23:00 AM

Hey, whatever happened to "sticks and stones may break my bones, but names can never hurt me"??? It's a good thing he didn't heckle that ridiculous coat they probably would have shot him on the spot! This is totally OUTRAGEOUS...not to mention, unconstitutional! Have we really gotten to this point in what is supposed to be OUR government? Yeah, Bob, I’m sure you’re on that list as well --. I guess “People Powered Media” is just too democratic for the “land of the free and the brave”!

It seems to fit a pattern. http://sdjllkde.blogspot.com/

Just to be clear, I am sure Gov. Rell isn't the first to keep tabs on her enemies. And in fact I would think this is a good carreer move for some. It demonstrates loyalty which as we know is the only quality needed to obtain and maintain a Governor's (Lisa Moody) appointment to a good government job.

Stogies. Hot or Not?

Just to be clear, I am sure Gov. Rell isn't the first to keep tabs on her enemies. Shes our own littie J Edgar Hoover.. in pumps. Lovely.

She's really returning to her roots, dealing with this in a very George Allen way.. take your enemies and send the goon squad! Smackdown, Virginia Style! (She's from Norfolk)

How the Fuck can you share intelligence and information when it's so blatantly obvious you're to damn stupid to gather any worth having?

But it's absolutely wrong to use politically-motivated revenge
Agreed. I suggest: Call the ACLU if that b*tch messes with the constitutional rights of bloggers and journalists, and sue the f*ck out of her.