At today's "Our Water, Not BRRRoadwater" polar bear plunge to raise awareness about the Broadwater future evironmental disaster, blogger and photo-journalist Ken Krayeske was in attendance, covering the event for a local publication.

Ken, as you may have heard, was the innocent journalist arrested for performing normal photographer's duties. His arrest may have been precipitated by an "enemies list" provided to police in advance of the governor's inaguration parade.

I'm not easily impressed, but to see Ken bravely covering an event featuring a Senator, a Congresswoman, and the Attorney General so soon after being thrown in jail just for SHOWING UP at a political event struck me as a really ballsy move.

So I had Sufi take this photo of me and my latest hero: 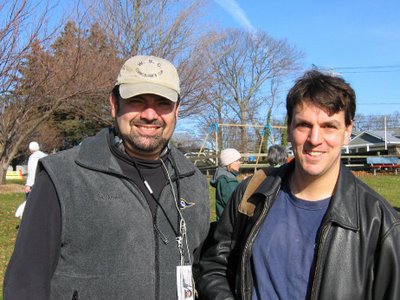 And yes, I had my press credentials prominantly displayed, just in case I was on any "hit lists" provided to the local police by panicky or spiteful politicos. I figured someone would have raised an outcry when seeing an honest online journalist being manacled and dragged away.

I mananged to get video of Senator Lieberman and several other notables. My external drive crashed tonight, so please be patient while I struggle to try to rebuild it. Video will be up sometime tomorrow.
Posted by CT Bob at 1/07/2007 08:15:00 PM

I saw you, your new camera, and that enormous ego on the 11 o'clock news tonight.

Can't wait to see what you put together.

Gee, how EVER did they manage to fit all that on a single TV screen?

So is the camera or the ego bigger? :)

Sorry, but I'm not going to allow an anonymous coward to call me names on my blog.

But until then, you can suck it. Hard.

...and thanks for reading "Connecticut Bob"!

You are doing an excellent job.

I especially like the short version of your James Amann interview. You capture the true essence of most Connecticut politicians.

Ken should do ok. There are enough of us out there likewise abused that will band together to see that Ken isn't ground up in the normal Corrupticut Meat Grinder way.

We are getting together, we will tell our stories, we will get justice.

P.S. try doing a search on my name in YouTube