TRex over at Fire Dog Lake hit one right out of the ballpark in his Late Night column yesterday. He discussed the Spocko vs. Disney Free Speech Controversay, when a blogger named Spocko posted audio snippets from KSFO Radio's (owned by Disney) right-wing homicidal rant-fests. The sponsors heard the snippets, causing the more respectable of them to drop their sponsorship of KFSO like it was a Tom Brady pass in the AFC Championship game! 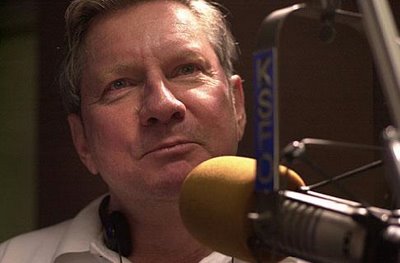 "If you're waiting for an apology, you'll be waiting
a long time," KFSO on-air host Lee Rodgers said.
Disney fired back at the lowly blogger by threatening to sue for copyright infringement. Fair-use issues were raised, and the story has become big news. Here's an excerpt from TRex's article; you can read the whole thing at FDL:

It's the sound of Wingnuts' heads exploding!  It sounds like…victory.  For you see, the Spocko vs. KSFO Snuff Radio story has made it all the way to USA Today, and for once the Big Media seems to have gotten it right.

Some advertisers, including Bank of America and MasterCard, have deserted KSFO since an anonymous media critic identifying himself online as Spocko began posting recordings of the station's "Hot Talk" hosts. Spocko and some of his readers have been e-mailing the audio to KSFO advertisers since 2005, asking the companies whether they want to be associated with the controversial rhetoric.

The First Amendment flap was debated Sunday on CNN's Reliable Sources. Dan Riehl, a blogger critical of Spocko, said some of the radio hosts' comments "were blown out of proportion or misrepresented" in the complaints to sponsors.

Mike Stark, another blogger and a Spocko ally, said: "The way to fight free speech that you disagree with is to engage in more free speech. And that's exactly what Spocko did."

Touché!!  Suck it, Riehl!  You know if this was the other way around, Riehl would be squawking like a wet hen that Disney/ABC was trying to silence him and trample upon his God-given right as an American Asshole to make a fool of himself in public....
Posted by CT Bob at 1/25/2007 06:21:00 AM

h/t the sponsors for having the sack to actually withdraw sponsorship [though I don't understand why you would sponsor something with content of which you are not aware]. How can a recording 'misrepresent'...bwahahaha. Same crap Limpbaugh, O'really, insanity, etc. try. No dice, boyz!

The sponsors don't give a crap about the content of a show, unless people complain about it. If enough people say "We're not going to buy your shitty products anymore because you promote that fascist's talk show", they'll eventually listen.