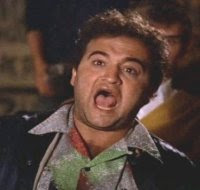 Today, Democrats in the State House torpedoed a bill pushed by Gov. Rell and the Republicans that would require beverage distributors to turn in unclaimed can and bottle deposits to the state. Previously, the recycling law contained a loophole where the distributors were allowed to keep the unclaimed deposits.

The Governor has been trying to squeeze every nickel and dime. She wants to seize the unclaimed deposits left behind when people don’t bring back bottles and cans.

“It’s about…$24 million in a full year,” Gov. Rell said. “You know, we need the revenue to help balance this budget.”

But the industry disputes those figures and says they need the money to run these recycling centers, they’re fighting hard against the proposal and it appears dead for now.

OK, so this seemed like a good way to help meet our state's projected $300 million budget shortfall, to the tune of nearly 10%. I was actually surprised that the state didn't already get the leftover deposits, and that every empty beer can I crushed against my forehead for the last two decades like John Belushi in "Animal House" was another nickel in the pocket of those guys; who BTW seem to have NO problem raising the price of a six-pack every single year!

So why do they get to keep the money that technically should go to the state, like it does in several other deposit-law states?

Did any of these companies donate to the democratic leadership in the assembly? It would be good to find out. Or maybe they just helped pay for dodd's countywide deal.

>>Did any of these companies donate to the democratic leadership in the assembly?

Go on up the LOB any time they're doing those all nighters they're so famous for.

It arrives by the truck load.

OK, now I'm fine with what they did! I understand completely! LOL!

Huh. Makes no sense at all except when the free beer comes into the picture.

Supporting the republicans, wondering why the democrats are being dicks...this is leading to some bad cognitive dissonance.

I think they're going to revisit this in the new session. They have to! They only put a little band-aid on the budget right now; they'll reconvene in January and do some serious work.

At least, they had better!