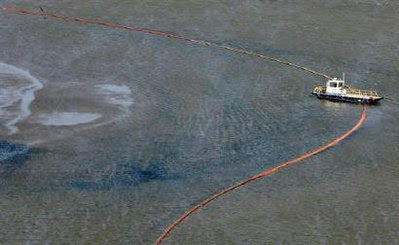 Now they estimate that, before it's stopped, the British Petroleum oil spill is going to top the 11 million gallons of oil dumped by the Exxon Valdez in Alaska in 1989.

From an AP report:

The Coast Guard and BP have said it's nearly impossible to know exactly how much oil has gushed since the blast, though it has been roughly estimated to be at least 200,000 gallons a day.

At that rate, it would eclipse the 1989 Exxon Valdez tanker spill — which dumped 11 million gallons off the Alaska coast — as the worst U.S. oil disaster in history in a matter of weeks.

Good work, douchebags. It would have killed you to put a shut-off valve on the pipe at the ocean floor, right?

It must also be remembered that, once this spill enter the Gulf Stream (as is expected), we could see this oil as far north as Cape Cod...possibly into Nova Scotia.

How's that "drill-y" thing workin' out fer ya, Sarah?

Lack of regulation of mining industry => mine collapse

We dont just need regulation, we need the correct regulation. Government can't do all the work, the average US citizen, needs to help to regulate the giants that end up hurting America and its Economy, and the American People.

Because Everyone Deserves a Good Laugh:

"BP Exploration and Halliburton Deepwater Completion Team Scores Another Victory with a Record-Breaking Well Producing 47,000 BOEPD and an Economic Value of $33 Million"

"This completion captured critical information key to the understanding of reliable, sand-controlled, high-rate, high-volume producers in the deepwater arena."

iBlog - I couldn't agree with you more completely.

We are now reaping the foul fruits of the Bush administration's lack of even the most basic oversight of our financial and industrial sectors.

When will the Tea Party leaders in Louisiana, Mississippi, Alabama and Florida be calling for their states to refuse any big-federal-socialized-government assistance in handling the spill???