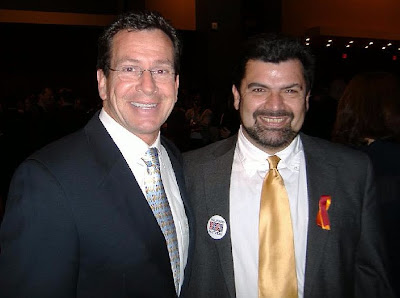 (Photo from the 2007 JJB Dinner)
Congrats to Dan Malloy for being the first gubernatorial candidate to reach the contribution threshold in the history of the CEP program.

Former Stamford Mayor and current Democratic candidate for Governor Dan Malloy today announced that his campaign has raised the sufficient amount of small-dollar contributions to qualify for Connecticut’s Citizens’ Election Fund (CEP). Malloy is the first gubernatorial candidate to ever reach the goal in the program’s short history. As a result, Malloy will have up to $8.5 million to spend in the 23 weeks of the campaign that begin the day after the Democratic Convention, which will be held on May 21 and May 22.

The CEP requires gubernatorial candidates to raise $250,000 in small contributions of $100 or less, in order to demonstrate widespread support and to avoid the influence of wealthy contributors and special interests.

“I’m grateful to the more than 4,000 people who helped us reach this historic milestone, and I’m humbled by their support,” said Malloy. “And, I'm grateful to my supporters across the state and everyone who helped with our fundraising efforts. They’ve guaranteed that this campaign will have the resources to compete with anyone and everyone.”

Malloy also called on Ned Lamont to abide by the spending limits of the program, but Lamont has stated on several occasions that unless the Republican front-runner in the race Tom Foley agrees to the same limits, Lamont says the playing field won't be even. Recent polls have indicated that Foley has a slight lead over both Malloy and Lamont, which is largely attributed to the relatively unknown politician's massive TV buys over the last several months. Lamont himself has started television advertising recently.

The Democratic State Convention begins in just under three weeks, on May 21st. We'll be live-blogging the event for the entire two days, in addition to my being a delegate representing Milford. It will likely prove to be a very interesting time.
Posted by CT Bob at 5/02/2010 04:54:00 PM