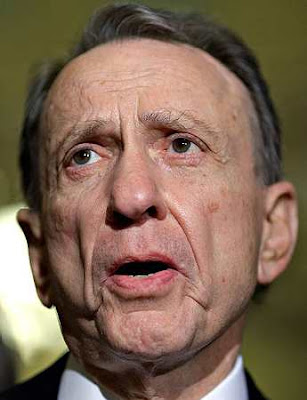 See? There IS some good news today!

Specter's transparent attempt to preserve his job in the Senate led to him switching parties and turning his back on everything he'd believed in for decades.

Hmmm...does that sound familiar at all, Sen. Lieberman?

Ned Lamont spoke in favor of Joe Sestak's candidacy back in 2009, in this video:

Democrats held onto Murtha's old seat in Pennsylvania too. This is a good thing and will take some of wind out of the doom&gloom pundits are predicting for the party in the fall.
Unfortunately, it will also rev up the horse race commentary they love so much.
oldswede

I had a Sam Adams when I found out... Hooray!, no more "magic bullet"!

spector didnt really turn his back on everything he believed in. no one in the senate votes purely republican or democrat, plus he was never considered devoted to every republican or conservative ideal. spector as a democrat isnt a stretch when you look at his career.

the sad part about this is that the "true democrat" was relieved of command as an admiral for creating a hostile environment for his troops and generally being incompetent as a leader. He also skipped a ton of votes as a congressman. This is horrible and the Dems will not win the seat in PA now.