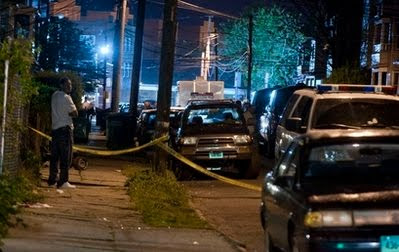 Faisal Shahzad, a naturalized US citizen from Pakistan, was arrested late last night while trying to flee the country. Shahzad had ties to homes in Bridgeport and Shelton, and police and FBI are searching those properties.

The arrest was the result of good police work and a massive effort to track down the suspect. I'm guessing that once authorities got the VIN number from the Nissan Pathfinder, they traced the vehicle back to its original owner. Finding that he had sold the SUV through a Craig's List ad, the digital fingerprint likely allowed authorities to find the source of the inquiry and gave them a lead to the location from which the suspect connected to the internet. Once they had a name, I'm sure they put out a watch to all the airports, and the suspect probably boarded the plane using the same passport he'd been issued when he became a citizen, raising a red flag with security and allowing authorities to stop the plane before takeoff.

The issue now is whether the man's actions are the result of him being an over-zealous lone nut, or if he was part of a larger conspiracy of religious extremists. Either way, authorities did a fantastic job finding and apprehending the suspect in this case.
Posted by CT Bob at 5/04/2010 07:11:00 AM

Just another misunderstander of the Religion of Peace, no doubt a lone nut. Nothing to see here folks, move along....

Will the suspect be mirandized or interrogated?

I'm so glad the watch list works, it watched him enter the Airport, it watched him go through security and it watched him get on the plane.
A failed bombing attempt in NYC and the next day a middle-eastern man pays CASH for a one way ticket to Dubai with no luggage...."right this way sir" uhmmm "sorry lady, yes you in the wheelchair, please enter here for extra screening".
Yes'm we've learned so much since 2001 have'nt we?
The list is certainly growing under this regime.

Um, they DID catch him, you know.