I've been uncharacteristically busy recently, and the political landscape here in Connecticut has been evolving so quickly lately that it's easier for me to simply list the events and title my posts "More stuff happening"!

So, here's some of the latest "stuff": 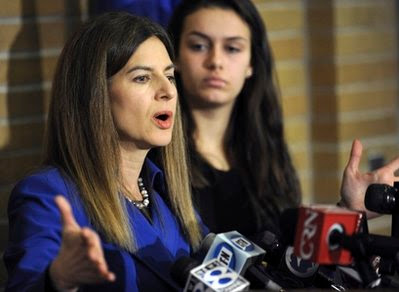 Susan Bysiewicz has been granted an expedited ruling in the Republican Party appeal to the court decision that essentially ruled that yes, she is indeed qualified to be Attorney General, so you Republicans should stop whining like a bunch of snotty-nosed children!

I'm guessing the actual legal decision was written in slightly more dignified language; in any case, I fully expect to see Susan win this round, and go on to the convention unencumbered by GOP legal maneuvers. Oral arguments are going to be held on the 18th, with a resolution likely soon after and well in advance of the Democratic State Convention. Visit Susan2010.com to stay informed.

State Health Care Advocate Kevin Lembo has made it official today and will run for State Comptroller to replace the departing Nancy Wyman.

As you know, before I became the Healthcare Advocate, I served as an Assistant State Comptroller for over 6 years where I worked on the state budget, health care policy, and the state employee & retiree benefit plan.

There is no learning curve for me as State Comptroller, no on-the-job training that we cannot afford. I am ready to begin work on day one to tackle the complex issues that face our state, and restore confidence in our government's ability to get the job done.

It goes without saying that I fully endorse Kevin's run for State Comptroller. This decision was an easy slam-dunk, I didn't even need to mull it over. He's just that good for the job! And I expect his will be one of the less-contested offices to be discussed at next week's State Convention.

Was it uncool for Ms. Wyman to, in effect, shove her former employee out of the race he had been running so hard and so well?

No, I really don't think so. Kevin has always said that he would gladly step aside if Nancy decided to run for Lt. Gov., and I'm sure it was always in his mind that if she did so, he'd switch to run for her job.