Unlike Bob, I am not a delegate to the convention, so Bob has given me (Kirby) the opportunity to make my case for Ned Lamont’s candidacy for governor.

I appreciated Ned’s courage and conviction when he ran against the junior senator from Connecticut in 2006. It is hard to believe it is four years ago now. The night of the August primary, I remember how we sat in awe, amazed at what we, the people, had accomplished by believing we could. And there, with the “millionaire from Greenwich ” were Rep. Maxine Walters and the Rev. Jesse Jackson. It was inspiring to have the opportunity to sit and talk with them and learn firsthand of their beliefs in the power average people have when they work together – and humbling to learn they were proud of us. 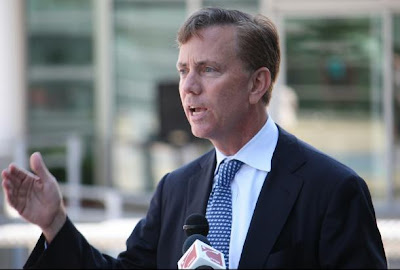 Ned brought an amazingly diverse group together – long-time politicians, activists, and rookies like us. It was a coalition that couldn’t be defined by race, gender, age, religion, or economic class. Because of his candidacy, people from the Netroots now serve on their town committees and will cast a vote at the Democrats’ convention Friday and Saturday.

And that is the foundation of my support for Ned Lamont for Governor. Now, more than ever, we need a governor who can build coalitions of people with very different life experiences. We need someone who is not a lifelong pol, but rather, one who understands business and health care. We’ve had too many years of Republican pols in the governor’s seat. One lifelong politician sold the office to the highest bidder while the other behaved more like the state’s grandmother than its elected leader.

Ned understands that health care and business are inextricably linked. If businesses can’t afford to provide health insurance to employees, they are less competitive for the best talent, and companies will look for other, lower-cost states in which to do business. Ned endorses SustiNet. He knows that if people are not tied to a job because they need the insurance, they will be free to seek out the opportunities that best match their skills, interests, and dreams. That increases the pool of talent for Connecticut businesses and strengthens our economy.

A Lamont administration will support business development and will rebuild Connecticut ’s economy. His creative plan is described here.

On a personal level, Ned showed me the kind of governor he’ll be a cold day in February this year. I was volunteering as an RN at the free clinic in the Hartford Convention Center . I had just finished talking to Ed Schultz, who was broadcasting live from the clinic (and started off his show that night by calling Joe LIEberman a coward). I saw Ned walking down the hallway where the exam rooms had been set up by using drapes for walls. Ned had a number of questions for me, and was talking to both health care providers and patients who were there for care. I heard Ed ask him to be on the show that evening. Ned said no – that he was there to learn, not to make an appearance.

There were plenty of other politicians there that day – and every one of them wanted to be on Ed’s show that night. But, Ned was the only one invited. His was the perspective Ed wanted for the show – not your run-of-the-mill politician.