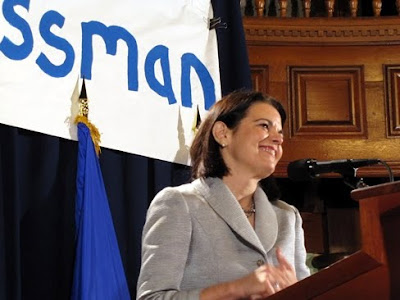 (Christine Stuart photo)
This morning Ned Lamont announced that Mary Glassman will forgo her run for governor and join his ticket as candidate for Lieutenant Governor.

It’s clear to Ned Lamont supporters that choosing Simsbury First Selectman Mary Glassman as his running mate was a smart political move and will help bring him delegate support at the convention, but more importantly a win in November.

Former House Majority Leader David Pudlin said it seems like Dan Malloy, the other top Democratic contender, is focused solely on getting delegate support at the Democratic convention, whereas Lamont is building a base for the November election.

“There’s something special about the Lamont campaign—he’s fixated on winning,” Pudlin said as he waited for Monday‘s announcement at Trinity-on-Main in New Britain.

Pudlin said by focusing on the convention and the delegates Malloy is ignoring a large segment of the population. In order to win in November, a candidate has to win the support of unaffiliated voters who will ultimately decide the election, Pudlin said.

Fixated on winning. Well, Howdy Doody better start laying out some concrete plans instead of ideas. I love Glassman and hope she can bring him some support, but just like national elections, nobody votes for the top guy based on who the second banana is

Well, I can think of a shitload of people who chose NOT to vote for McCain based solely on his choice of that loopy dingbat for VP, so I think it can only help Lamont.

You should read Lamont's "Business Plan For Connecticut" before you spout off about how he lacks ideas for the state. The guy is an experienced businessman who knows a thing or two about a thing or two.

BTW, it give me loads of pleasure to use a phrase like "loopy dingbat" in a sentence!

yes, I will give you that one on smilin' Sarah and the old man, but i bet you can't find ten people who can name the present LG outside of our political circles.

I have seen his plan, the problem is, his ads portray him as this excitable guy throwing out cliche lines. As a guy in marketing, I can tell you he needs some work on getting the message across better in that medium -- because the tv ads make him look vapid on plans. Less anger, more substance perhaps, and television may not be the best place to get across concrete ideas anymore. Yet TV ads do impact people's impressions of a candidate, like it or not (that's why they buy it in the first place)...I am for Ned, but to non-political people I have chatted with, he is coming off as a bit of a doofus.

Perhaps the addition of Mary will help balance things a bit...they should do some ads together, it might temper that "howdy doody" image a bit. cheers...

Good points, all. I would imagine Lamont's publicity team won't waste a lot of time getting Mary's face on some of his TV ads in advance of the convention. There's still a lot of somewhat frustrated Hilary supporters in our party, and they'll certainly identify with Mary being on the ticket.

I have to say that his ad about the business plan, located here, is probably the most comprehensive and persuasive 60-second ad I've seen in this race. You rarely see that much policy conveyed in such a concise message. I'm impressed.

Actually, I'd point to the 2006 primary as an indicator of Glassman's potential contribution to the ticket.

I think a Lamont-Glassman ticket will be a dynamic, energetic, and exciting ticket for Democrats in the Fall. Both are relatively young. Ned is 56 and Mary is 51, and I'm confident that together they can excite the Democratic base and convince Independents to vote for them. This ticket will definitely have the endurance to battle Tom Foley and the Republicans from now to Nov 2, 2010. Lamont brings an outsider's view to our government while Mary brings her experience inside government. It's a great 1-2 punch that can knock out the Republicans and begin seriously addressing our state's economic woes.