Last night I was a delegate at the 3rd District Congressional Convention.

Which, for all practical purposes, was Rosa's convention from beginning to end.

I've rarely gone to a political function that contained so much goodwill towards a candidate as this one. The proceedings moved along very smoothly at the Seymour Middle School, and everyone seemed honestly happy to be there. 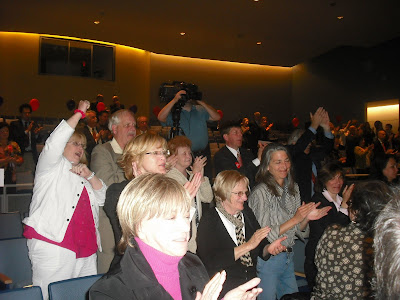 The Milford Delegation as Rosa accepts the nomination for her 11th term. 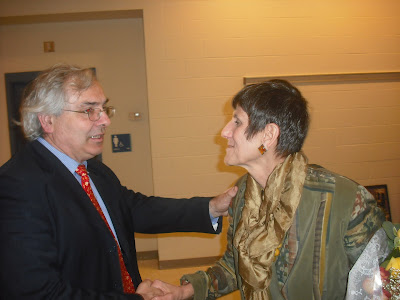 Delegate Mike Brown greets Rosa at the post-convention reception. (The cannoli were delicious!) 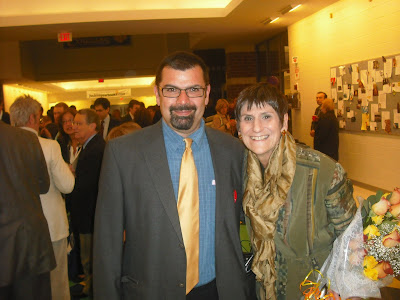 Rosa poses with your humble Delegate/Blogger. 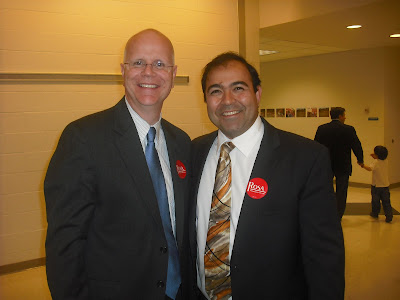 I shot about 45 minutes of video featuring the wonderful nominating speeches for Rosa, and her remarks after she accepted the nomination. It will take a day or two to get them online (a totally foreseeable hard disc crash, and an unforeseeable increase in real-life employment will delay them a bit; possibly by Thursday, but I'm not promising anything).
Posted by CT Bob at 5/11/2010 09:33:00 AM

It was a great convention, and you got some great pictures. I look forward to seeing the video online.

As one of the other few members of the fourth estate that attended the convention, I put up my post about it this morning:

One thing about Delauro and the Democrats... "Vote them out" does not apply to her and her 11 terms as a congresswoman.

FYI folks, she robbed 200,000 from the taxpayers to go vacationing in Italy on a jet intended for official business while then criticizing the Auto industry for having theirs. She also expensed the best food and hotels to the taxpayers as well another $111,000.

She is also "hell bent" on destroying local farming and food production rights with her "Food Safety and Modernization" Scam. Coincedentally her husband has Monsanto and its soon to be food Czars lined up for lucrative police state jobs. Jobs intent on regulating our state farmers with the new expansion of the Police State her bill calls for.

Also Instead of responsibly representing her constituents on real issues, she engages in Feminist battles to rescue and defend the illegal activities of Ms. Capone Almond and every other feminist who feels ripe with anger and injustice.

She also never misses an opportunity to raise taxes, and expand the welfare state.

She also supports Illegal immigration and the free stuff they demand. She also can't wait to get any illegal immigrants registered and voting Democrat.

Why do you Dems like this liberal Communist/ National Socialist who hates America and the US Constitution so openly and brazenly.

I just don't get it. What has Delauro done to make all her treasonous behavior so desirable to you all. You would think that with 41 Million American's on Food Stamps her job is done... perhaps she is aiming higher?

I don't get it can anyone explain their love for her?

Because she has a lovely singing voice.

She makes me want to go on Welfare, she comforts people who cry they have nothing and the world is against them.

At least when the day comes that I give up on Capitalism and encourage my third world friends to join me in the looting, I can count on her to bilk hard working Americans for my new life of getting high and playing Xbox.

By then again we can sing Kareoke together, perhaps some song condemning those who selfishly will not share their money with those who need a Heroin fix. Real funny, and yet so true.

Where does she stand on Drug testing people who collect Welfare... oh wait she opposes it!

Keep talking, and you'll be sure to lock up the tea bagger vote.

Tea Bag Votes (Fed up with both parties)

The ultimate mob rule! Sheeps Vs. Wolves what will be for dinner! Oh yes that would be the minority..