Gee, what a surprise! A fragile marine environment damaged, perhaps fatally, and a regional economy in total chaos because of reckless and improperly safeguarded oil exploitation.

Think how fucked we'd be if that loopy dingbat from Alaska ended up just a 72 year-old heartbeat away from occupying the Oval Office!

Even Gov. Arnold Schwarzenegger has reversed his position on offshore drilling in California, according to the East Bay Express.

Maybe all this panicky short-sighted thinking will finally be put to rest, and we can start actively developing a long-term energy policy for America that doesn't murder the environment. 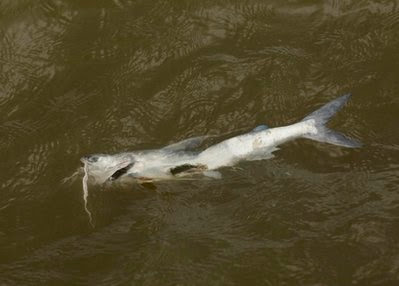 A dying catfish that has been picked at by birds floats on the surface of the water in the Breton Sound of the Gulf of Mexico off the coast of Louisiana Monday, May 3, 2010. Fish and wildlife are vulnerable to the oil spill resulting the explosion and sinking of the Deepwater Horizon oil rig.

The dying animal in your photo is a Gafftopsail Catfish, also known as a "sailboat catfish." Was that intentional?

And you're right about deepwater oil drilling.

No, I didn't know that. I just grabbed the image from a story about the oil spill disaster. I didn't even know there were saltwater catfish.