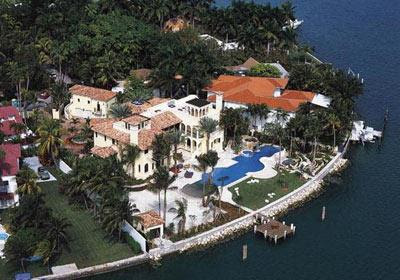 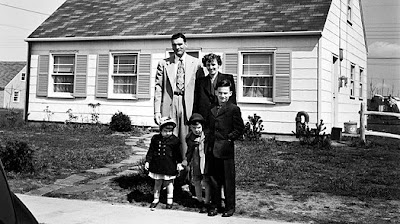 So, it happens that a regular reader here (Lakezoarian) took my very tasteful and season-appropriate holiday photo card and gave it the "Gene Simmons" treatment via Photoshop.

I don't think I've ever seen anything so horrific in my entire life! 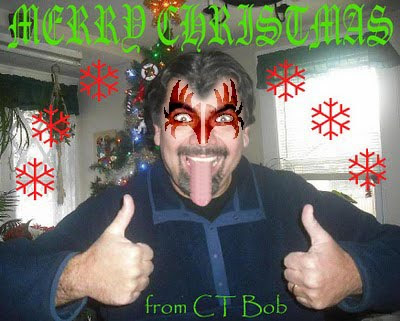 UPDATE: I have to say, the most disturbing thing about this picture is the way I look like I have "crazy eyes"! It's really weird and unsettling. I'll never open my eyes wide like that for a photo again.
Posted by CT Bob at 12/28/2010 09:15:00 PM 2 comments:

Because so many of you little boys and girls have been naughty this year, here ya go: 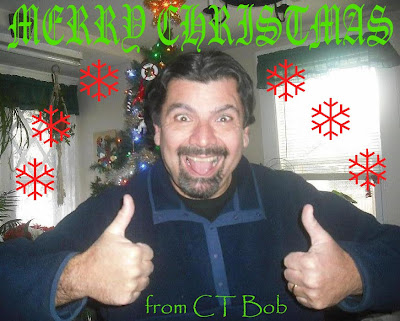 I need a vacation. I'm taking a break from political blogging for a bit.

Other than maybe posting an occasional observation here, I'll likely be back in January.

Embarrassed to be a Democrat

(image via Toothpaste For Dinner)
Today everything I feared about our party has turned out to be true.

So, we get those toxic tax cuts, the very ones that managed to drive us into this awful recession over the last 10 years, for another two years. Due in large part to our President. You can pretty much count on it being a permanent tax break for the wealthy, because by the time it comes up again, we'll have some GOP dingbat like Sarah Palin fouling the Oval Office. Then, it'll NEVER go away!

At this point, I'm starting to doubt that it's possible to change our party from the inside. What's the point of being a Democrat if we insist on behaving exactly like the fucking Republicans? I'm seriously considering quitting the party altogether. Maybe it's time I apply for free agency, like a fifth-year NFL running back.

Congrats to the UConn football team 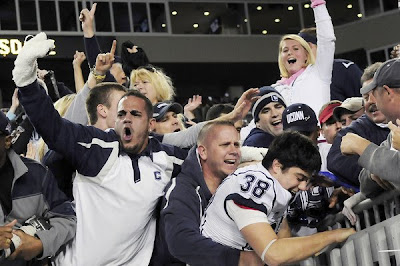 (Bettina Hansen/Hartford Courant)
Salvaging what was looking like a lost season after opening with a 3-4 record, the UConn Huskies came back strong, winning five in a row to get the Big East title and earning a place in a BCS bowl for the first time in school history.

I watched the game Saturday night, and it was a real nail-biter. With seconds left on the clock, UConn kicker Dave Teggart made a 52-yard field goal to break a 16-16 tie and win the game!

(this totally sums up my feelings right about now - article reposted from CT Blue by permission of John W. - go read his blog because it seriously rocks)

Another post at (Daily) Kos, as at so many of our left leaning blogs, documenting yet another “outrageous” act by a Republican, this time the fact that John Kyl is holding up the Start Treaty in order to get a tax cut for the rich.

I must confess that I am not outraged by this, nor am I outraged at any of the other outrageous acts in which Republicans have engaged lately. I will admit that the acts of the Republicans are objectively outrageous, but I no longer find them emotionally outrageous. At this point, it is just Republicans being Republicans. It is what they do. Worth noting and cataloging to be sure, but not worth an increase in one’s blood pressure. After all, so far as the Republicans are concerned, I can take comfort in the fact that I am in no way responsible for their push to establish a plutocracy. I didn’t vote for them, contribute money to them, or support them in any other way.

In the single case of the tax cuts, it would have been easy- it would still be easy- to brand the Republicans as lackeys of the rich, the servants of the folks who are living off of our bailouts. I am 100% certain that if given the choice, most people would prefer no action on taxes over giving yet another tax cut to the rich. But that’s not going to happen. The best we can hope for is a “temporary” extension that will be made permanent later, either by another Democratic capitulation, or by the Republican president elected in 2012 due to the Democrats demonstrated weakness. Meanwhile, the Republicans will, out of feigned concern about the deficits they created with their tax cuts, demand cuts in programs that benefit the lower 98%, to which demands the Democrats will cravenly accede, since they won’t want the pundits and the Republicans to think they can’t make “tough choices”.

CTBob comments: my only observation is that taking "no action on taxes" would equal the expiration of the Bush tax cuts, and I personally would be willing to take that hit on my own middle class tax burden if it means the wealthy have to jump off that gravy train they've been riding for the last ten years.

Because that's a large reason why we're in this budget mess in the first place. I consider it the sort of required sacrifice (although on a much more modest level) that our parents and grandparents made during WWII to ensure our nation's survival.

We should stop behaving like spoiled children being denied a pony on their birthday. I can absolutely survive without a new car every 36 months, a McMansion, or a 62" flat screen for a few more years if it means a chance for economic stability.
Posted by CT Bob at 12/03/2010 10:55:00 AM 1 comment:

The new 2011 GOP strategy of destroying everything good and pure had begun!

From the good ol' AP:

House Republicans have temporarily blocked legislation to feed school meals to thousands more hungry children. Republicans used a procedural maneuver Wednesday to try to amend the $4.5 billion bill, which would give more needy children the opportunity to eat free lunches at school and make those lunches healthier. First lady Michelle Obama has lobbied for the bill as part of her "Let's Move" campaign to combat childhood obesity.

House Democrats said the GOP amendment, which would have required background checks for child care workers, was an effort to kill the bill and delayed a final vote on the legislation rather than vote on the amendment.

Because the nutrition bill is identical to legislation passed by the Senate in August, passage would send it to the White House for President Barack Obama's signature. If the bill were amended, it would be sent back to the Senate with little time left in the legislative session.

House Majority Leader Steny Hoyer, D-Md. said the House would hold separate votes on Thursday on the amendment and the bill.

Give it up, kids! Your nutrition isn't a concern of the New GOP Ruling Class! 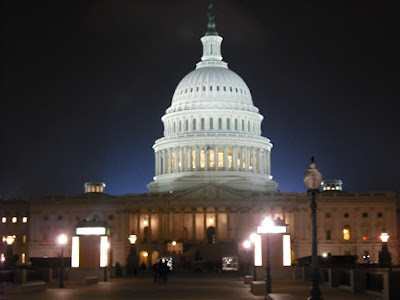