Covid cases in Connnecticut under control

Gov. Ned Lamont has worked tirelessly to ensure Connecticut is among the lowest incidences of Covid-19 cases in the nation. His tremendous leadership has helped our state become the model for America's battle against the pandemic. Only three sparsely populated New England states have slightly lower new infection rates. 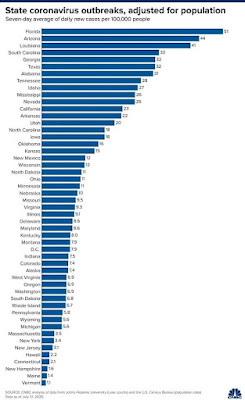 I've chatted with a few Trump-supporting acquaintances recently, and even THEY complimented Lamont's handling of the crisis. For the Kool-Aid drinkers to admit THAT is really something!

We must remain vigilant and keep on using common-sense safety habits, such as wearing a mask anytime you're within six feet of other people and continuing to thoroughly wash your hands and use sanitizer. We aren't out of the woods yet, and judging how some other states are going, we will have to deal with this for many, MANY more months.

Which is the direct result of poor leadership. We all know whose fault THAT is!