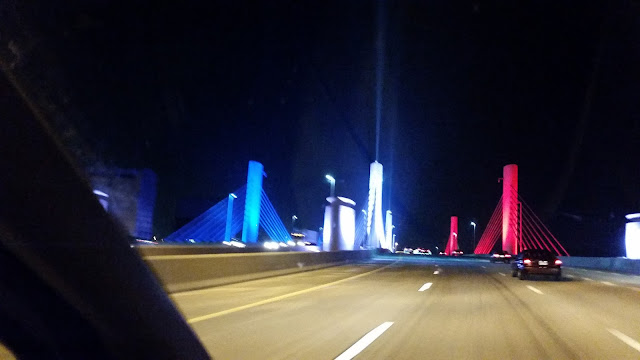 The Quinnipiac Bridge was illuminated beautifully for the weekend of the 15th anniversary of September 11th, 2001.

I doubt there's anyone under the age of 25 who doesn't remember exactly where they were when they heard the news of the attack. The television images were riveting as well as horrifying. These were civilians, not soldiers, who were dying as we watched.

There have been many TV documentaries and films about the terrible events of that day. But the one that really chills me to the bone, because it happens in real time, is the documentary "9/11" by the Naudet brothers.

It was on Youtube for a while before getting pulled down, but I'm sure it's available somewhere online. Not on Amazon Prime, I'm sad to say, as I've recently subscribed to this service and find it amazing! However, the film was broadcast on network television within months of the attack, and it might be out there somewhere for viewing.

I'm very glad that a new building has finally been completed in the vacant area of New York skyline that had previously been occupied by the twin towers. I tend to agree with Donald Trump, who immediately after the attack suggested that we rebuild both towers "just one floor higher" in the exact location of the two destroyed towers.

But I think we did very nicely with the new "Freedom Tower" (or "World Trade Center" tower, as it's referred to by pretty much everyone) and by creating a memorial park with two water pools that occupy the former footprint of both towers as a place of remembrance.

Joyce and I visited there back in December. It felt like a very sacred place. Most people, even tourists, kept their voices low and respectful. It seemed like a good gesture to the thousands who lost their lives that fateful day.