When it comes to original Americana, I always say one thing:

It's all about the music.


"Wagon Wheel" is the title of a song originally sketched by Bob Dylan and later completed by Old Crow Medicine Show.

The song describes a hitchhiking journey south along the eastern coast of the United States, from New England in the north-east, through Philadelphia, with the intended destination of Raleigh, North Carolina, where the protagonist hopes to see his lover.

"Wagon Wheel" is composed of two different parts. The chorus and melody for the song comes from a demo recorded by Bob Dylan during the Pat Garrett and Billy the Kid sessions. Although never officially released, the Dylan song was released on a bootleg and is usually named after the chorus and its refrain of "Rock Me Mama." Although Dylan left the song an unfinished sketch, Ketch Secor of Old Crow Medicine Show wrote verses for the song around Dylan's original chorus. Secor's additional lyrics transformed "Rock Me Mama" into "Wagon Wheel." Secor has stated the song is partially autobiographical. The song has become extremely popular since its inclusion on Old Crow Medicine Show's major label debut, O.C.M.S. in 2004, although the song appeared in earlier form on the now out of print "Troubles Up and Down the Road" EP in 2001. Dylan's song is often credited to "A. Crudup.", and the official publishing information is Dylan/Secor.

In this video the song is covered by a local Pennsylvania band called Willin-N-Able. Watch the video and listen to the subtle musical nuances that this band performs almost effortlessly. It's true audio artistry!

In fact, I enjoyed this video SO much that I probably watched it at least a dozen times!

Yup, it's ALL about the music!

This is an interesting view of how non-human primates share a knowledge of fairness and inequity.

So, it's likely a primal instinct in all of us to dislike being rewarded differently for doing the same job.

Which explains a lot about us.

Joe Lieberman is a guy who is much more comfortable around conservatives than the people he represents. I can't say I'll miss him when he's gone.
Posted by CT Bob at 11/17/2012 12:26:00 AM 3 comments:

Rachel Maddow sums it up

In an elegant and powerful three-minute piece, MSNBC commentator Rachel Maddow explains in simple language why the results of the election were a surprise to no one except the Republicans, and how they must accept reality if they are ever to break out of their ever-widening cycle of defeat.

I hope it's warmer this time around

We went to the Inauguration in January 2009, and it was something like 17 degrees when we went to the parade route. During the day a breeze kicked up, so even though the temperature rose to nearly 30, it was frigid all day long.

I'm glad to have been there for it, but this time around I might watch it on TV in front of our fireplace!

Our president successfully staved off a spirited Republican challenge, and America obviously wants to see Obama finish the job he started.

Elizabeth Esty gave me a bit of a scare, but she held on to win it! Rosa, Jim, Joe, and John all go back to Congress to continue the excellent work they've been doing.

As Tom Tomorrow says, it's good we didn't replace Joe Lieberman with that crazy wrestling lady! 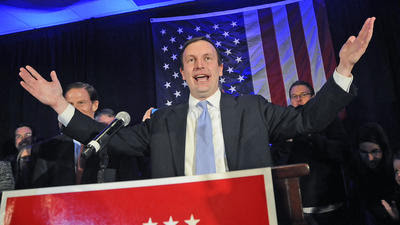 A tie in Dixville Notch! 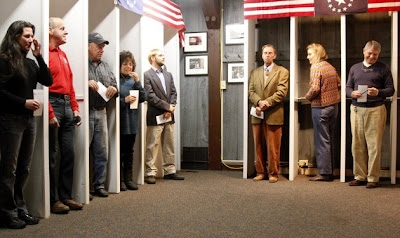 CAN YOU BELIEVE IT?!?

President Obama and former Governor Romney BOTH got five votes and a tie in the tiny New Hampshire town that nobody gives a shit about every OTHER day for four years!

Can we just stop with the silliness?

Oh, and in the national results, here's my prediction of the popular vote: 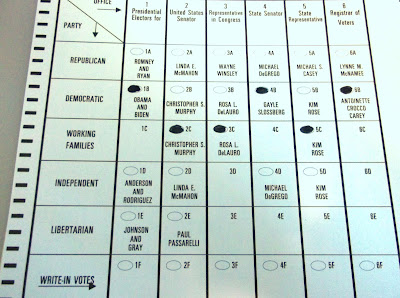 Doing my bit to keep the Working Families Party line available for the next election. I always vote WFP if my candidate is running on it. The Democratic line will always be there, and I think in a close election it helps to have a second ballot line on the form.

Anyway, I'll be checking in periodically today. And blogging later as the results start rolling in.

Get out and VOTE today! 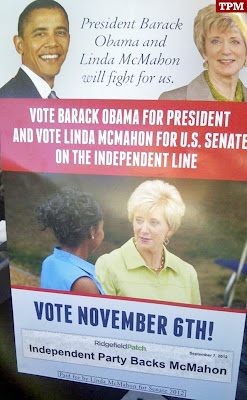 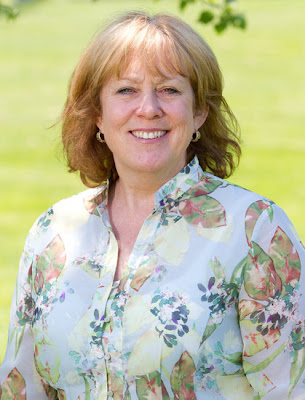 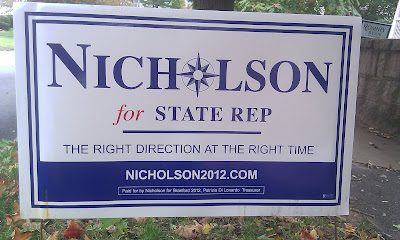 ...did anything newsworthy happen while I was gone?

Oh, and that gal Sandy?

She's kind of a "rhymes-with-witch", if you know what I mean!

Taking my electricity away like that! Really! She should be ashamed of herself!

Anyway, back to reality.