Here's the Squirrel Nut Zippers performing "Put A Lid On It" from 1996.

A reconstituted version of the band was involved in the 2006 senate campaign for Ned Lamont, who defeated Joe Lieberman in the primary before losing to him in the general election when Joe ran as an independent and got tons of Republican support. They recorded a customized version of the song, sung by Rikki Lee Jones, which was an instant classic among us political aficionados:

This was six years ago. Six fucking years ago! I can't believe it! What is it that makes time accelerate as you get older? Somebody get Stephen Hawking working on it right away.
Posted by CT Bob at 5/27/2012 07:00:00 PM 2 comments: 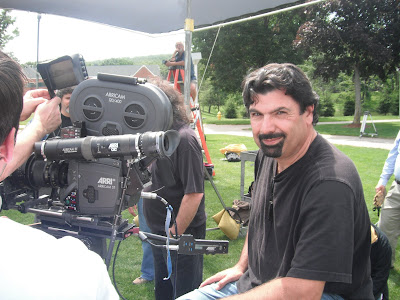 There's only two weeks left for you to sign up for a spot in the CT Film Industry Training Program that starts on June 4th. Here's the details:


The program is four weeks, Monday through Friday, 9AM to 5:30PM at Quinnipiac University in Hamden.
Tuition is $500
You must be a Connecticut resident (sorry all you other 49ers!)
Application deadline is May 31st, apply HERE FOR ADMISSION.
When you complete the program, you will be knowledgeable enough to get a job as a PA (Production Assistant) in the craft you selected.

The program works! I took the course in 2010 and was hired onto a film starring Keir Dullea ("2001: A Space Odyssey") and Kathleen Chalfant ("Law & Order", "Rescue Me"). I've also worked on other films and projects.

Don't delay! If you've ever dreamed of working in the movie business, or if you want to get a glimpse of how movies are made, you need to sign up for this program now.

Last month John Hartwell on his excellent political interview show "Stream of Conscience" spoke with Ned Lamont about how the nation seems to be gradually inching towards war with Iran, and what we need to do to prevent it.

The Connecticut Democratic Party today at the 5th Congressional District convention overwhelmingly endorsed Speaker of the House Chris Donovan as the 5th Congressional District candidate for Congress in 2012. Donovan won the Democratic Party's endorsement by beating both of his competitors by more than 3-to-1; one of the largest margins in a contested convention in recent memory.

"I am honored to have the support of so many hard-working Democratic activists, and the endorsement of the Democratic party," said Donovan. "I will fight every day for the right of every Connecticut family, and every American, to be treated with fairness, dignity, and respect. That is what I have done in Connecticut, and it's what I will do in Congress."

"Not everyone shares the values of fairness, dignity, and respect," continued Donovan. "Congressional Republicans are actively blocking job creation measures, attempting to destroy Medicare and Social Security, and waging a war on women's access to health care and contraception. In Congress, I will fight for all of our families to have access to great jobs with strong benefits, to Medicare and Social Security as they age, and I will fight to make sure that every woman has access to the health care and contraception that they need." 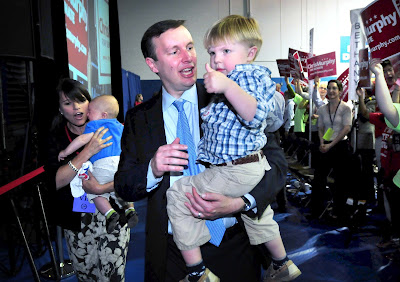 In the recent State Democratic Convention, Congressman Chris Murphy won a major victory over his closest rival for the party's choice as candidate for US Senate. He'll be taking over the office left by "Ain't-no-way-he-could-possibly-win-it-anyway" Joe Lieberman, who will certainly take a seat on the lobbying gravy train after he retires (finally!) in January.

Murphy's closest rival for the nod garnered a mere 24% of the vote, giving him a slightly better than 3 to 1 edge in delegates, and the Party's overwhelming voice of approval.

Now I happen to know that Susan Bysiewicz is a nice enough person. Some of the stuff I personally witnessed that she tried to pull at the 2010 State Convention left me cold though. And I heard someone say that she used her unspent campaign funds to finance a series of statewide parties in her honor, which if true, I think is at least somewhat unseemly.

She has pledged to run in the state primary for senate, which will be literally unwinnable for her and cost the state thousand of dollars, but that's her right and she is eligible to do so.

But I can't help but think how Susan is a like ship without a rudder, floundering to the port and to the starboard, looking for a harbor. First it was the Governor's office. Then, when it was likely she would be easily defeated, it became the Attorney General's seat. Which, when it was ruled that she couldn't legally hold that office, two years later it is now the Senate seat soon to be vacated by Joe Lieberman.

Who happens to be a butthole.

But that's beside the point.

I just wanted to say it.

Because Joe Lieberman is demonstrably a butthole. Check his record.

The point is, Susan is a bit of an opportunist who seems more interested in personal position than actually earning the respect and loyalty that someone seeking a national office should pursue. If she was smarter, she would have never left the comfy confines of the Secretary of State office, where she assuredly would have spent the remaining years of her career in. But her ambition apparently got in the way.

Chris Murphy has been working for Connecticut on the national political scene for six years. I interviewed him on several occasions, and I've seen many of the bills he worked hard to get passed. He's the real deal. He absolutely wants to see Connecticut do better, and I'm sure he'd be willing to pass up on further ambitions to see this accomplished.

I support Chris Murphy for Senate, and you can too, by visiting www.chrismurphy.com

I know it's quite a bit of alliteration there, but I'm a congenitally lazy writer and I simply can't be bothered with actually crafting a more polished headline. If you want good writing, go read CT News Junkie. You want crap writing, well, you're in the right place!

That aside, Sen. Richard Blumenthal has introduced a bill to protect employees from having their bosses invade their private personal accounts. This invasive practice is clearly an abuse of authority, and really makes no sense except as a power play by employers. I mean, pretty much everything you see online about a person can be accessed by following their Twitter feed, or friending them on Facebook, or joining their circles on Google (whatever that means; I'm on Google but I've never activated my account).

Making it a job requirement to allow your employer to access your personal accounts, which can easily lead to fraud and identity theft, is way out of bounds. I think there's even an amendment in the US Constitution that is supposed to protect a person from that sort of bullshit.

But we all know that employers often don't consider their employees as citizens; they treat them like cattle, or some other insignificant mammals. Lemurs maybe, or squirrels. And employers don't have any hesitation to invade the privacy of squirrels. (At least, I think not)

So Sen. Blumenthal introduced a common-sense act to protect those citizens and (possibly) squirrels.

I'm going to look forward to hearing whatever bullshit argument that the Republicans cough up to try and block this act from becoming law. Because they will definitely argue that it's the right of corporations to do anything they please, so fuck all you little people with your little people issues. Or something to that effect.

Go there an sign the petition or whatever it is that shows you support this kind of leadership. I did.

When you apply for a job, nothing gives your potential employer the right to go to your house and sift through your personal belongings. So why should he or she have the right to passwords for your online accounts?

Such practices are a real abuse and a threatening problem: employers wrongly invading job applicants' privacy by demanding passwords for private email accounts and social networking profiles like Facebook.

I introduced the Password Protection Act of 2012 to outlaw this threatening problem.

Help build public support for this crucial legislation to keep your employer out of your private, password-protected accounts. Make your voice heard today and add your name as a supporter of this important legislation.

Sad to hear of the passing of Adam Yauch aka MCA of the Beastie Boys. The band was instrumental in popularizing hip-hop with the mainstream audience. All too young at age 47, Yauch lost his battle with cancer this week.

I attended the Tibetan Freedom Fest (which Yauch helped create and promote) on Randall's Island in NYC back in 1997. The Beastie Boys headlined, and it was a memorable event.

Check out this lineup, via Wikipedia:

Damn, but they don't have shows like that very often anymore! RIP Adam Yauch. He will be missed.